Originally manufactured in 1945, this pistol was subsequently arsenal upgraded to its current configuration as a prize to be awarded for marksmanship proficiency from the U.S. Naval Training Center in San Diego, California. The pistol was won by Robert O. Hawkins Jr. who, at the time, would have been a midshipman at the U.S. Naval Academy. Hawkins graduated from the academy in 1961 with a BS in engineering. An included scan of a Certificate of Title lists the pistol by serial number and that it was presented to Hawkins. The left of the slide has the standard Remington-Rand address while the right is inscribed "SECRETARY OF THE NAVY'S PISTOL TROPHY-1961/WON BY MIDSHIPMAN ROBERT O. HAWKINS, JR, U.S.N." The frame bears the standard markings including "FJA" inspection marking. It is fitted with tall blade and notch sights, jewelled barrel chamber and hammer sides, reinforced grips, and an unmarked full blue magazine.

Very fine as arsenal upgraded for presentation, retains 98% plus of the high polish blue finish with some very light edge and cycling wear. The grips are excellent with a few scattered light handling marks and crisp checkering. Mechanically excellent. 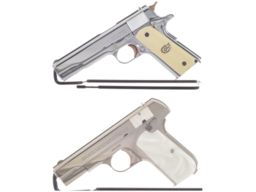 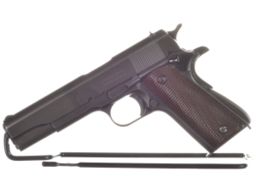 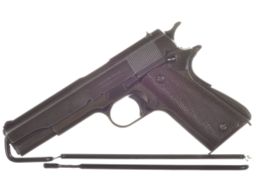 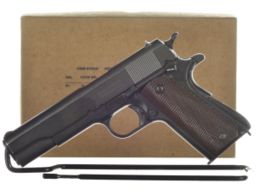 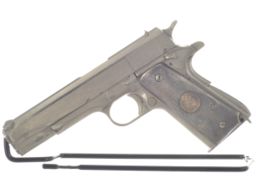 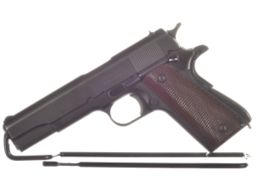