According to the included factory letter (signed by the President and CEO of Colt Manufacturing) this pistol was one of the original run of Colt "Rail Gun" Government Model pistols produced to United States Marine Corps specifications as the M45A1 Close Quarters Battle Pistol. Intended as a replacement for the Corps' aging stock of 1911/1911A1 pistols, the M45A1 was destined expressly for units like Force Recon, Marine Special Operations Command (home of the Marine Raiders), and Special Operations Capable Marine Expeditionary Units. 1,000 of these pistols (470 used and 530 unissued) were traded by the Marine Corps under warranty back to Colt in exchange for newer Ionbond finished replacements, Colt in turn released these original Marine Corps pistols to the public with the caveat that the "USMC" marking be struck out. A set of 3-dot Trijicon night sights are installed on the "COLT***USMC" marked slide, with "VP" and "L" on the left side of the trigger guard and the U.S. nomenclature on the right, including the military-specific "M1070CQBP" model number. A 4-groove Picatinny rail is integrated into the dust cover, with a long solid trigger, skeleton hammer, beavertail safety with "speed bump", ambidextrous thumb safety, serrated flat mainspring housing, "desert camo" G10 composite grips, Wilson Combat magazine, and a Colt National Match barrel with a finely polished and beveled throat. Includes original military issued shipping box as well as a copy of the American Rifleman article "Last Of The Breed" about the pistol.

Excellent overall, retaining 98% plus original FDE Cerakote finish with a few minor handling marks and crisp grip checkering. Mechanically excellent. Box is very fine with a few minor storage and handling marks as well as having the military serial number and RFID number blacked out. A scarce opportunity to own a genuine U.S. Marine Corps semi-automatic pistol, and what is almost certain to be the last Colt 1911 adopted by the United States Armed Forces. 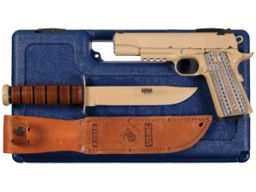 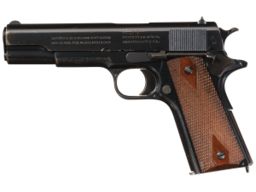 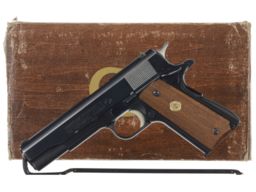 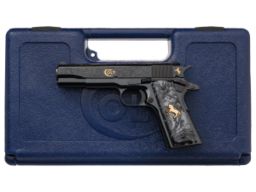 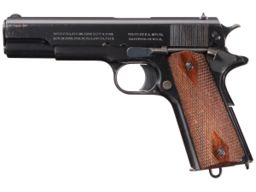 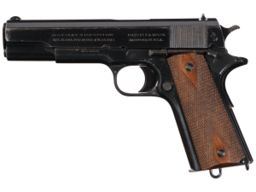