The Model 1795 is historically significant as the first official standardized U.S. martial arm and the first firearms manufactured at the U.S. armories. The Model 1795 was based on the French Model 1766 widely used during the Revolution, and was the main infantry arm of the War of 1812. This musket has the correct Type II markings and features with a round bottom flash pan and shorter front end on the trigger guard (c. 1806-1809). Type II Model 1795 muskets are described on pages 42-47 of George D. Moller's book "American Military Shoulder Arms Volume II" with the lock of this exact musket pictured at the top of page 44 and its trigger guard at the bottom of the same page. The top picture caption states, "The rear profile of the cock's straight tang is continuous with that of the body. The round-bottomed pan is not integral with the lock plate, the frizzen's tail is straight, and the frizzen spring has a triangular finial. These are among the salient lock design features introduced in 1804. The last year 'SPRINGFIELD' was stamped in an arc behind the cock was 1806." The lock is wearing a desirable style of markings with a vertical "1806" behind "SPRINGFIELD" in an arc marked at the tail, and at the center of the lock is a script "US" above a shielded eagle looking to its right. The bottom picture caption of the book states, "Trigger guards with the short, pointed front end shown here were used in the production of Model 1795 (Type II) muskets at Springfield Armory only for a very short time in 1806." The barrel has the standard "P/eagle/V" proofmarks at the left of the breech and a partial "US" mark on top. "1806" date marked on the buttplate tang. "E. Co" is branded in the stock ahead of the trigger guard finial. A large "88" is carved into the left of the buttstock. "GDM" (George D. Moller) collection initials marked at the toe of the stock. Includes a reproduction leather sling. Provenance: The George Moller Collection

Very good with smooth brown patina overall, some light pitting at the breech, and nice lock markings. Stock is also very good as sanded and re-oiled with scattered scratches, carvings and branding as mention above, a circular scratch on the left of the buttstock ahead of the carving, some gouges on the left flat, slightly undersized at the top right of the buttplate, and some chips on the right of the buttplate. Mechanically fine. 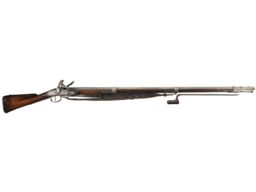 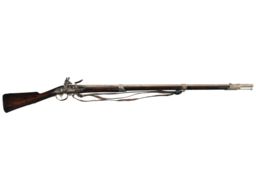 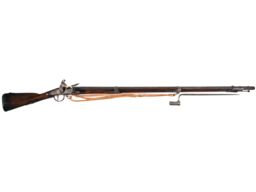 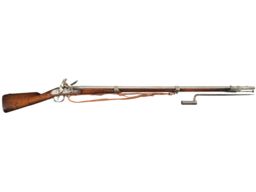 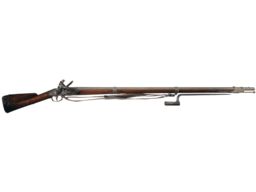 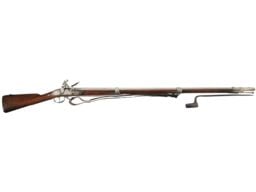