This rare revolver was manufactured in 1860, the first year of production, and is one of only about 4,000 Colt Model 1860 Army Revolvers manufactured with the 7 1/2 inch barrel, full fluted cylinder and the "-ADDRESS SAML COLT HARTFORD CT.-" barrel marking. Some of these early Colt Model 1860 revolvers with fluted cylinders were among the approximatively 2,230 sold to southern dealers and were used by Confederate soldiers. These revolvers appear in the first 8,000 serial numbers and have "four-screw" (actually five screw) frames cut for shoulder stocks. It also has a German silver blade front sight, "COLTS/PATENT" frame marking, "PATENTED SEPT 10th 1850" in one cylinder flute and matching numbers on the barrel, frame, trigger guard, back strap, cylinder, wedge ("103"), and arbor pin. Both 7 1/2 inch and 8 inch barrels were manufactured for the fluted cylinder variation. Generally, the 7 1/2 inch barrel was part of the early production run of the fluted cylinder Model 1860 revolvers. The revolver is fully plated in silver. The left side of the grip is carved "PD/to/CS." The highly desirable stock is numbered to the gun with the correct serial number "1103" stamped on the lower tang and buttplate. Although the Ordnance Department purchased a significant quantity of Model 1860 Army revolvers with attachable shoulder stocks early in the Civil War, attachable shoulder stocks are rare. When these rare stocks are encountered they are generally not correctly numbered to the gun. The lower tang also has the number "14" stamped behind the saddle ring. The attaching hardware and buttplate are nickel plated. Colt Model 1860 expert and author Charles Pate examined the Colt records for information pertaining to this Model 1860 no. 1103 with matching shoulder stock. His conclusions were recorded in an included September 2021 letter. Mr. Pate found that the factory ledger entry for the box containing this revolver contained only five pistols, which is unusual as boxes commonly contained fifty pistols, and this box of five was shipped by express to Colt's New York Agency on January 16, 1861. Mr. Pate notes, "In mid-January 1861 Sam Colt's health was deteriorating, but he was well enough to visit New York City, ostensibly on a shopping trip with his wife, but he certainly would have spent a good bit of time conferring with William Hartley, his manager of the New York Agency...The capable and dependable William Hartley was entrusted with the important mission of representing Colt in Washington, which included making several marketing calls upon influential people and presenting pistols to many of them." Mr. Pate suspected that this pistol was one of the five pistols Hartley used for demonstration purposes during his stay in Washington. "We can only speculate about their subsequent disposition for, unfortunately," continued Mr. Pate, "none of Mr. Hartley's records have survived except a few of his letters to the factory."

Fine, retaining 80% of the possibly period retailer applied silver plating with a smooth brown patina on the balance. The grip is also fine with typical stock mounting impressions, high edge wear, dings and scratches. The stock is very good with 97% of the period nickel plating remaining, a couple stress cracks where the extension meet the yoke and minor dings and scratches on the revarnished walnut. Mechanically excellent. An exceptionally rare early production 1860 Army with a 7 1/2" barrel, fluted cylinder and matching shoulder stock, possibly a special finish private presentation by Sam Colt. 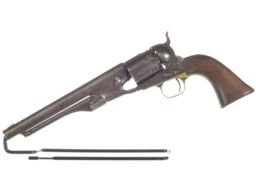 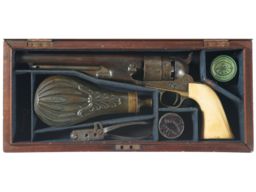 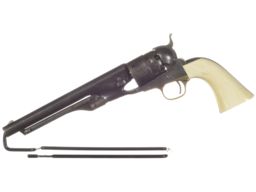 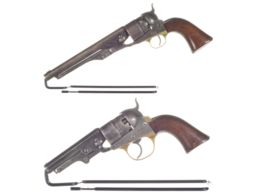 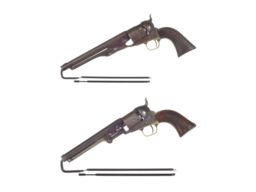 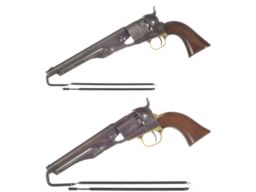