This exact rifle is pictured on page 173 of Harold L. Peterson's book "Arms and Armor in Colonial America 1526-1783" in which the picture caption states, "German pattern rifle dated 1725 used in Pennsylvania." This exact rifle is also pictured and described on pages 459-461 of George D. Moller's book "American Military Shoulder Arms, Volume I" in which Moller references this rifle as being in Peterson's book and further states, "This rifle is presumed to have been brought to North American by one of the German immigrants during the first half of the 18th century." Faint markings on the top flat of the barrel with a 1725 date (the last digit is faint/partial) at the end. This early jaeger rifle features eight-groove rifling, a low profile blade front sight, fixed V notch rear sight, double set triggers, iron tipped wooden ramrod pipe, sling swivels mounted towards the front of the forend and on the trigger guard, incised and raised relief scroll and floral carving on the stock, sliding patchbox, and an iron trigger guard and buttplate. A period brass band was added to the forestock for reinforcement. The outside of the lock is unmarked, and the underside of the lock is marked with raised letters "RC" in a sunken rectangular cartouche. "GDM" (George D. Moller) collection initials marked at the toe of the stock. Includes a later leather sling. Provenance: The George Moller Collection

Fair, exhibiting scattered moderate dark pitting and wear from period use on the barrel and smooth brown patina with scattered light pitting on the lock, trigger guard, and buttplate. Stock is also fair as lightly sanded and re-oiled with numerous scattered scratches, dents, chips, old repairs including a period spliced replacement forend, and attractive carvings. Mechanically fine. This early 18th century Germanic flintlock Jaeger rifle with use attributed to the Pennsylvania area is full of character and would make an excellent addition to any early long rifle or pre-Revolutionary War era collection! 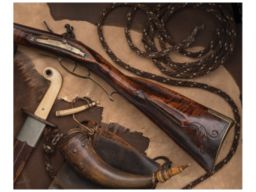 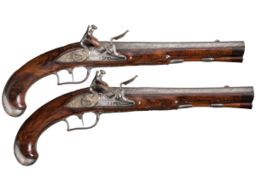 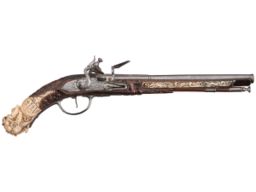 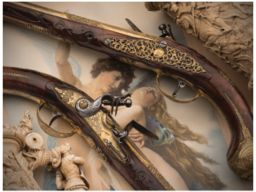 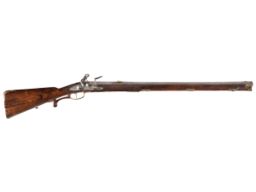 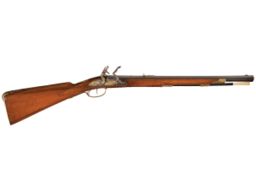