This is a rare example of one of the 1,400 Colt Model 1909 Revolvers purchased by the U.S. Marine Corps in 1909. These revolvers were very similar to the Model 1909 revolvers ordered by the Army and Navy, and in turn also similar to the later Model 1917; however, the Marine Corps had a few requests that set these rare revolvers apart. The most noticeable difference is the markings on the butt, which in this case are " U.S./M.C./No/581". These revolvers were also ordered with a round butt grip frame profile rather than the square butt of their Army/Navy counterparts, and fitted with checkered walnut grips rather than the smooth grips found on Army/Navy M1909s. The standard two-line address and patent dates are on top of the barrel with the caliber marking on the right, the Rampant Colt with stylized "C" on the left of the frame, serial number "25069" on the yoke and partial "5069" on the cylinder latch, and the previously mentioned Marine Corps markings on the butt along with a lanyard ring.

Fine, retains 60% plus of the original high polish blue finish and 50% of the original nitre blue with the balance having thinned to mostly a smooth grey-brown patina, most noticeably on the grip straps, and a light cylinder drag line. The grips are very good with some scattered minor handling marks and slightly worn but well-defined checkering. Mechanically excellent. 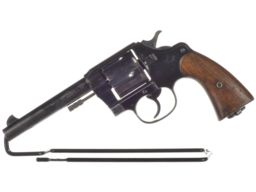 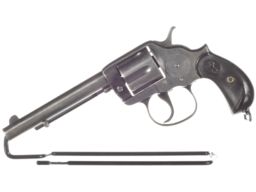 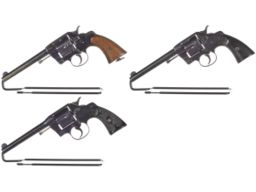 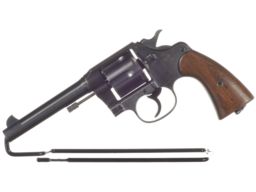