A somewhat unusual design for the time, the Breda Model 30 was the primary light machine gun of the Italian armed forces during World War II, and served as the firepower backbone of most infantry formations. A true "heavy metal" machine gun, the Breda design banks heavily on machined steel construction with a recoil driven closed-bolt mechanism. Though physically rugged, the Breda was heavy, suffered from issues with feeding and extraction, struggled with dirt and debris (an issue that became dire in Africa), and was handicapped by the use of a fixed box magazine for feeding. Between the various issues, the Breda's effective rate of fire was closer to the American M1 Garand than its actual counterpart, the Browning Automatic Rifle. Fixed blade front and elevation adjustable notch rear sights, with a conical flash hider and takedown handle installed on the ribbed barrel, the fixed magazine on the right side of the receiver and a hinged top cover. The top of the receiver is marked "GOBIERNO DE (removed)/MITRA. LEGG. Cal. 7M No.33/BREDA ROMA 1935 A.XIII"; the end of the top line is illegible, but similar markings have been seen on Breda MGs attributed to Costa Rica. A folding bipod assembly is installed at the front of the handguard, with a pair of ribbed panels on the pistol grip and a straight buttstock with flip-up shoulder rest.

Very fine as deactivated, with 75% of the blue finish, showing areas of brown patina, spotting, wear and high edge marks. The stock shows a number of cracks and chips, and has been partially stabilized at the wrist by adding a bolt. The chamber area of the barrel has been ground and torch cut, with the breech welded shut, though the bolt is still mobile and the weapon can be cycled. Aside from the deactivation, the bottom of the magazine shows damage suggestive of a bullet strike or similar battlefield trauma. NOTE: This is a registered DEWAT weapon with the Bureau of Alcohol, Tobacco Firearms and Explosives (BATFE), as a National Firearms Act (NFA) weapon, that is fully transferable. It has been classified as a Curio or Relic as defined in 27 CFR, 478.11. These weapons are still subject to the provisions of 18 U.S.C. Chapter 44 and 27 CFR part 478. 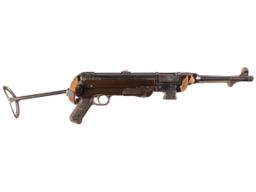 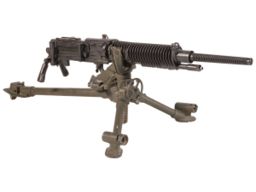 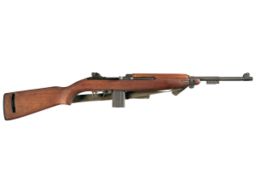 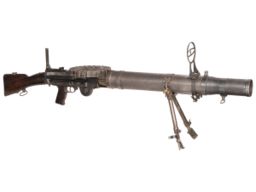 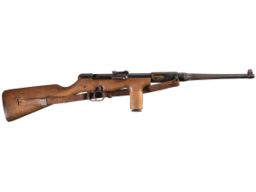 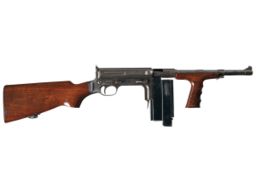