This model was the first model of Sharps carbines issued to the U.S. Only 175 were ordered and marked for the U.S. Army and issued to the 1st and 2nd U.S. Dragoons in the Southwest in 1854 and 1855 making them especially desirable for Sharps and U.S. martial arms collectors. This example has the proper "US 1852" marking on the buttplate and "U.S/S.K/P" marks on the barrel for a U.S. contract carbine. It also has the usual Sharps and Maynard patent markings. The barrel has a brass blade front and flip up "squirrel ear" rear sight. A long sling ring bar runs from the left side of the receiver to the brass barrel band. The Model 1851 was redesigned by Richard S. Lawrence and William Jones based on a model submitted by Christian Sharps. The changes made to the design without Christian Sharps' involvement are part of what led to him leaving the company, but this model, manufactured by Robbins & Lawrence, established the Sharps as one of the most advanced and desirable American firearms of the 19th century, and the Sharps rifles and carbines were famously used by the Free Staters during Bleeding Kansas, during John Brown's Harper's Ferry Raid, by Union forces during the Civil War, and out on the American frontier late during the post-Civil War settlement of the West and Indian Wars. The Sharps Model 1851 carbines are distinguishable from the later Sharps firearms by their hammers which are mounted inside the locks. Provenance: The George Moller Collection

Good with a mix of brown patina and artificial brown finish on the barrel and action, enhanced recut markings mostly visible on trapdoor on receiver and barrel, attractive aged patina on the brass, four cuts on the right side of the buttplate near the heel, and some small marks and scratches. The re-oiled wood is good with traces of the cartouches on the left, repairs at the toe, scattered scratches and dings, and mild overall wear. Mechanically fine. This is a very scarce antebellum era Sharps carbine that would have seen use in the legendary American Southwest in the 1850s by the U.S. cavalry in skirmishes with the Navajos and Apaches. These U.S. contract Sharps Model 1851 carbines are rarely available and are thus missing from most U.S. martial arms and Sharps collections. 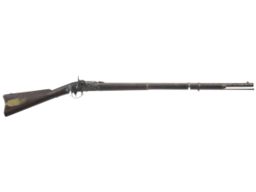 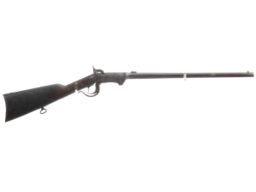 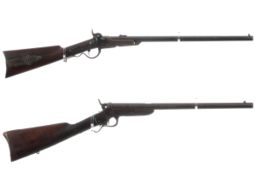 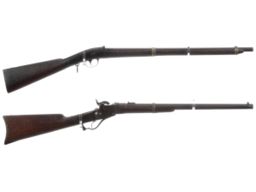 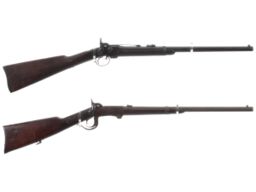 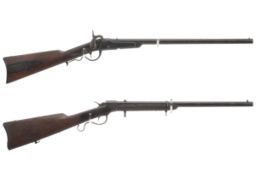