This U.S. Artillery Model Colt SAA revolver is accompanied by a "Letter of Authentication" (copy) by Colt Single Action expert John A. Kopec. The letter describes the features and condition of this revolver, and the details of the Colt "Artillery" alteration and refurbishment. In the letter, Kopec notes that the revolver was previously listed in the survey he co-authored ("Cavalry & Artillery Revolvers...a Continuing Study") and the frame no. 5071 places it within the historic Lot Five (nos. 4500-5504) serial number range. In the aforementioned survey, the frame serial number 5071 is listed on page 271 among the known Lot Five SAAs now surviving as Artillery Models. Lot Five was one of the prime groupings of SAA revolvers issued to the 7th Cavalry from Ft. Abraham Lincoln on July 2, 1874, just before the 7th departed for the Black Hills and Custer's infamous defeat at Little Bighorn. Per Kopec, this revolver no. 5071 is in close proximity to revolvers nos. 5020, 5065 and 5099 which are "presumptive Custer Battle examples," making for "a good chance that our subject revolver while still in its Cavalry configuration had also served with the Seventh Cavalry during the Indian Wars." Kopec also notes in the letter, "This revolver has been recently assembled using these 'Lot Five' components by a well-known 'gun restorer.' It had been previously presented to this writer for authentication purposes. Remembering well, when we advised this gentleman, 'We frequently encounter these Artillery revolvers with one desirable 'Lot Five' component, maybe on some occasions with two of these 'Custer' serial number, but never with four 'Custer related' components being found on one Artillery revolver.'" The frame (no. 5071), trigger guard (no. 5321), back strap (no. 4504), and barrel (no. 5142) fall into the Lot Five serial number range (nos. 4500-5504). Note that the backstrap is only 3 digits away from revolver no. 4507 listed in General Alfred Terry's diary as being his personal sidearm. Troops under General Terry's command arrived after the Battle of Little Bighorn to discover the bodies of Custer and his men. Like the frame, the barrel number is in close proximity to "presumptive Custer Battlefield" host guns: nos. 5100, 5128, 5133, and 5180. Kopec states the grip has also been changed out since he last examined the revolver. The cylinder, barrel, trigger guard and back strap were inspected by O.W. Ainsworth and are stamped with his "A" inspection mark. The frame has the "US" marking. With a wooden French cut case containing a cleaning rod and "L" shaped screwdriver.

Fine with substituted parts (see above). 60% arsenal refurbished blue finish remains on the barrel and ejector rod housing, 50% blue finish remains on the cylinder and strong amounts of blue remain around the trigger, otherwise thinned to a smooth brown patina. The back strap retains hints of blue finish with a smooth dark brown patina on the balance. 40% of the case colors remain on the hammer and frame. The grip is very good with a few hand marked initials, high edge wear and minimal minor handling marks. Mechanically excellent. 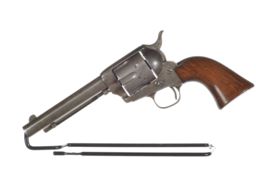 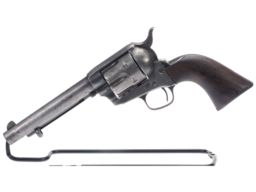 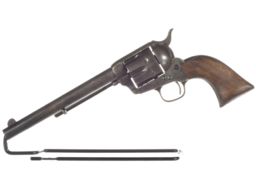 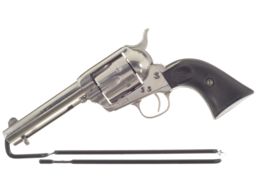 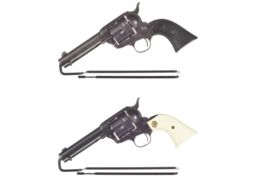 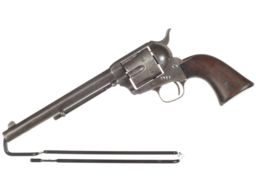