This is an extremely rare Marlin Model 93 Trapper Saddle Ring Carbine. The carbine features silver blade front sight pinned in a forged base and folding rear sight graduated to 900 yards. The top of the barrel is marked with the two line address/patent dates ahead of the rear sight, to the left of that it is marked "SPECIAL SMOKELESS STEEL" flanked by diamond shapes and the top of the barrel at the breech is marked ".32 H.P.S.", which stands for 32 caliber High Power Smokeless (most carbines were chambered in 30-30 caliber). The upper tang is marked "Marlin/MODEL 93" and it is factory drilled and tapped for mounting a tang sight. The barrel and full magazine are blue and the receiver, lever and buttplate are casehardened. There is a saddle ring and staple mounted on the left rear of the receiver and the carbine is mounted with a smooth forearm secured by a single barrel band and straight grip stock with a steel carbine buttplate. Accompanied by a letter from the Bureau of Alcohol, Tobacco, Firearms and Explosives dated 31 June 2001 listing this carbine as being removed from the NFA (National Firearms Act) and classified as a curio and relic. Also accompanying the carbine is a short typed letter on Marlin Firearms letterhead stating that the writer was under the firm belief that the 15" barrel was original to the rest of the carbine and that records show that only 61 Model 93 Trappers were ever made with a 15" barrel. Also there is a handwritten letter from George Madis stating that after carefully examining the carbine he determined that it is all original and made by Marlin. Mr. Madis goes into detail on several areas of the gun, such as the "Model 93" marking adopted in 1905, the rarity of the caliber, the originality of the staple and saddle ring, and the buttplate, the correct proofmarks on the bottom of the barrel under the forearm, the matching serial numbers on the upper and lower tang under the stock, on the inside of the buttplate and on the stock. The sights, standard drilled and tapped upper tang and to its finish and condition at the time of writing. Provenance: The Milan J. Turk Collection

Very fine. The barrel and magazine retain 90% plus of the original bright blue finish with some wear on the muzzle ends, a few tiny areas of flaking and a few light scuffs and scratches. The receiver retains 65% of the original vivid case colors with the balance a mottled brown patina with a noticeable patch of dark pitting visible on the upper left rear. The lever shows strong original case colors in protected areas with the balance a mottled gray patina with a small amount of minor pitting on the bottom of the loop. The buttplate has a smooth brown patina. The wood is excellent with a few overall scattered minor dings and scratches. The markings are crisp and clear. The action is smooth. An exceptionally rare, completely original Marlin Model 93 Trapper Saddle Ring Carbine in rare 32 High Power Smokeless caliber. It may be quite some time before another is offered at public sale. 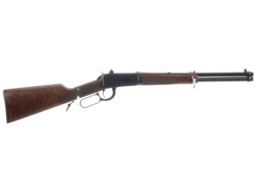 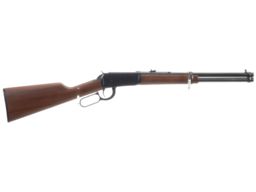 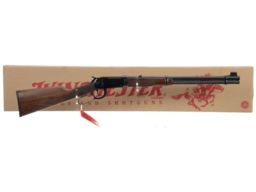 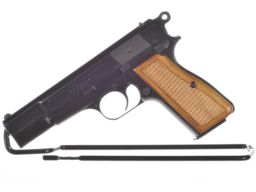 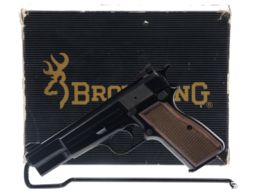 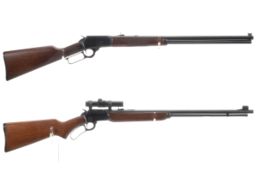