The Remington Cane Gun was designed by John F. Thomas, Remington's master mechanic, and patented on 9 February 1858. These cane guns were one of the first civilian firearms produced by Remington, and were an attempt to get a piece of the flourishing market in gentleman's defensive accessories. These Remington cane guns, like their contemporary cane guns or sword canes, were intended to give a strolling gentleman the means to defend himself from stray dogs, robbers seeking to relieve them of their valuables, or any other unforseen dangers. It is estimated that approximately 500 of the percussion cane guns and rifles were manufactured between 1858 and 1866, with production significantly decreased during the years of the Civil War. This example, being in smoothbore "shot only" configuration, is even more scarce, with no reliable estimate placed on the total number manufactured, but the survival rate indicating that it was far less than that of the 500 rifled examples. An article in an included copy of the June 2020 issue of "Man at Arms" by Dick Littlefield goes into further detail about this specific cane. The article cites a very early Remington advertisement in which the company boasts their "NEW PATENT GUN CANE" that was "ARRANGED FOR USING BALL OR SHOT". In most ways the two types look and operate very similarly, however, this smoothbore example lacks the short rifled barrel that other examples have, instead having a smooth steel core that runs the entire length within the gutta percha sleeve. It also has a longer chamber attached to the firing mechanism which was filled with shot and held in place with a small wad. The barrel measures approximately .50 caliber at both ends, which is far larger than any of the known rifled examples. The serial number "14" is visible on the firing mechanism and iron ferrule at the tip, and "38" is on the chamber which may relate to shot suggestion. It is possible that these smoothbore cane guns were serial numbered in the same range as their rifled counterparts or in their own range. The iron ferrule is also marked with the Remington address and 1858 patent date. The cane itself has the desirable brown gutta percha "ball and claw" handle, a German silver band where it meets the shaft, another silver band around the area of the firing mechanism, the remainder sleeved in brown gutta percha, and the aforementioned nickeled iron ferrule at the tip. The overall length is 33 1/2 inches. Also included is a letter on Richard Littlefield Antiques letterhead stating similar information to the article and that the cane was sold to the consignor. Provenance: The Milan J. Turk Collection

Very fine, retaining most of the original brown finish on the gutta percha, 80% of the nickel finish on the ferrule, and attractive antique patina on the silver with a couple minor stabilized cracks, and some scattered light handling marks. Mechanically excellent. 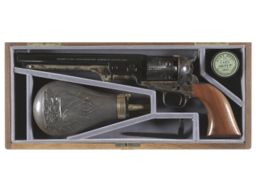 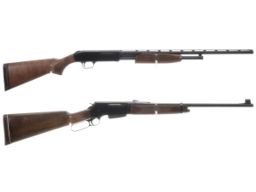 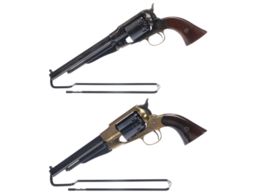 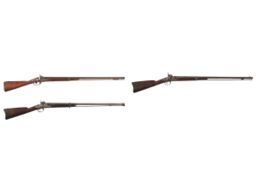 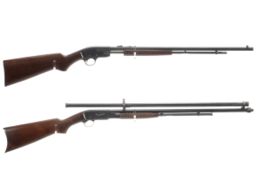 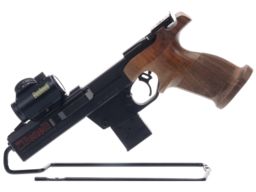