During the early to mid-17th century some of the finest blades in the Europe were being produced by various makers located in Solingen, with this example having the maker's mark of Clemens Horn (1580-1630). Horn is noted as being one of many makers whose blades were imported en mass to England because of their noted superiority to English-made blades. Horn's "unicorn head" maker's mark is located on both ricassos. While even plain utilitarian blades by Horn are noted as being imported, this example shows a significantly higher level of embellishment. The lower quarter of the blade is beautifully etched with panels of vine and scroll as well as an inscription on either side, all of which is gold filled. The inscription on the left is "PLUS TOST MOURIR QUE CHANGER. ANNO 1610" or "SOONER TO DIE THAN CHANGE. YEAR 1610" translated from French and Latin. The inscription on the right is "IEHOVA HUMILIBUS SCUTUM NOBILISSIMV" followed by a smaller script "M", translated from Latin is "JEHOVA IS THE MOST NOBLE SHIELD OF THE HUMBLE". The guard consists of dual side rings on the right, dual finger rings on the top and bottom, straight quillions, looping guard on the left, and a knuckle guard, all of fluted iron with some floral detailing. The quillions, side rings, and knuckle guard are accented with spheroids relief chiselled with interlocking knot patterns which are repeated on the spherical pommel, all with backgrounds gilded filled. The handle is fluted and wrapped with coper wire The overall length is 43 1/4 inches with a 36 1/2 inch blade that is 1 3/8 inches wide just above the guard. The edges of the blade appear unsharpened, and the tip is blunted, indicating it may have been shortened at some point. Three other examples of Clemens Horn blades of various types with very similar etching can be seen in the Metropolitan Museum of Art (Accession Number: 2010.165), The Cleveland Museum of Art, and The Victoria and Albert Museum.

Very good, showing mostly a bright grey patina overall and retaining nearly all of the gilded fill with a few scattered patches of light pitting or brown oxidation, a few light nicks near the tip of the blade, and slightly loose wire wrap on the grip. 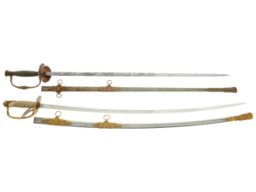 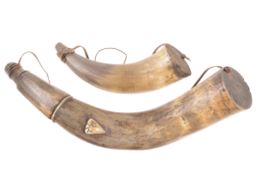 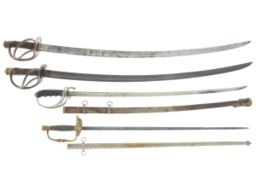 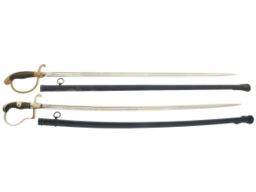 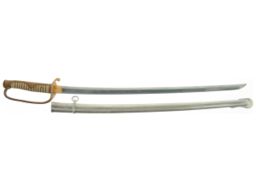 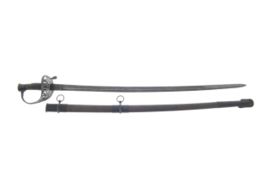