This is a beautiful example of a , Colt Model 1905 Military semi-automatic pistol. This was Colt's first real entry into the semi-automatic pistol field with a gun that was chambered in the new 45 ACP round. This model was the true forerunner to the Model 1911 series of pistols, which as we know ushered in over a century of Colt Model 1911 production. This pistol is accompanied with a Colt factory letter dated April 1987 that lists this pistol in this configuration as being shipped on November 19, 1909, to Montgomery Ward & Co. in Chicago, Ill. It was one of the pistols in a three gun shipment. The right side of the slide is marked "AUTOMATIC COLT/CALIBRE 45 RIMLESS SMOKELESS" in front of the ejection port, and the left side is marked in two blocks "PATENTED/APR. 20. 1897. SEPT. 9. 1902. DEC. 19. 1905." and "COLT'S PT. F. A. MFG. CO./HARTFORD CT. U.S.A." with the circled Rampant Colt behind the serrations. The serial number is located on the left side of the frame above the trigger guard bow. The upper left trigger guard bow bears the Colt "VP/triangle" proof, and the lower is marked with a "W". Early spur hammer version with half-cock notch and casehardened finish. The grips are the early light colored checkered walnut versions with the diamond pattern around the screws. The pistol has the Colt high-polish blue finish overall with the trigger, extractor and magazine release having the Colt niter blued finish. It is complete with one later production all blued magazine. Provenance: The Milan J. Turk Collection

Exceptionally fine overall with 90% of the original Colt high polished blued finish overall, wear on the edges and high spots with some light nicks on the front grip strap, and slightly more wear around the edges and damaged and partially absent mainspring screw. The trigger and extractor retain 85% of their niter blued finish. The hammer retains 90% of the original vivid case colors. The grips have a nice matching color on both sides with excellent checkering overall, some slight wear or flatness on the top of the diamonds in the center of each grip panel. Magazine catch needs adjustment, otherwise mechanically excellent. 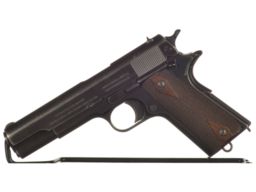 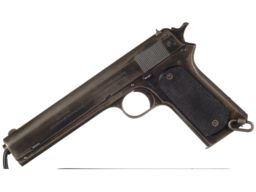 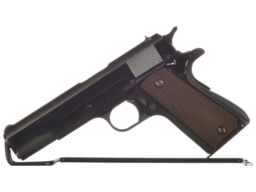 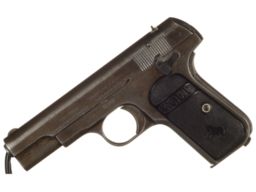 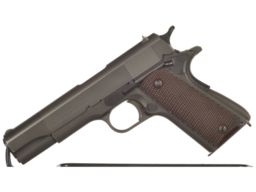 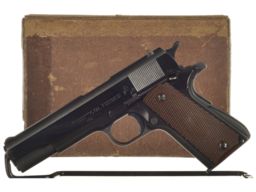