This is an example of a rare Colt Model 1907 .45 ACP U.S. Army contract pistol, the design of which was one of only 207 pistols manufactured, most of which, except a few, were shipped to Springfield Armory to be issued for troop tests with the U.S. Cavalry. These pistols were serial numbered in their own range, #1 to #207. This pistol design, like all the Model 1907 pistols, were issued for cavalry troop trials and delivered in March 1908, to the Springfield Armory. The pistols in the 101 to 207 serial number range were equipped with a grip safety, narrower ejection port than serial number 1 to 100 and externally visible chamber indicator. Looking at the pistol one can see the initial beginnings of the design changes that would eventually evolve into the Model 1911 pistol. This specific pistol is accompanied by a photocopy of a Colt Factory letter dated December, 1986 verifying the serial number, caliber, 5" barrel, blue finish with grips "Not Listed" and that it was shipped to the U.S. Government, Commanding Officer, Springfield Armory, Springfield Ma., on March 17, 1908 in a shipment of 200 pistols. The remarks state that records indicate a modified hammer, vertical ingestion, auto indicator to show chamber is loaded, straightened stirrup, longer stirrup pin, no indication of a lanyard loop, and that the "KM" initials are for Major Kenneth Morton, the U.S. inspector of Colt Model 1905 .45 pistols during the period of 1907-1908. The left side of the slide is marked: "PATENTED/APR.20.1897. SEPT.9.1902." in a two line block followed by: "COLT'S MFG. CO./HARTFORD. CT. U.S.A" in two lines. There is a faint, partially visible marking between the two blocks. The right side of the slide is marked: "AUTOMATIC COLT/CALIBRE 45 RIMLESS SMOKELESS" in two lines ahead of and below the ejection port. The left side of the frame has the serial number located above the trigger guard bow and the front of the trigger guard bow is stamped with the "K.M." initials of Ordnance Inspector Major Kenneth Morton. The right forward trigger bow is marked with the factory rework mark "K". The pistol has the high polish Colt commercial blue finish with casehardened hammer. The extractor and some screws have a niter blue finish and the grips are checkered walnut with small diamonds surrounding the screw escutcheons. The magazine is unmarked and has a high polish blue finish. The field trials of the Colt Model 1907 Army Contract pistols were an important step in the development of the Model 1911 Pistol and its adoption by the U.S. Army. The Model 1907 Army Contract Pistols are among the rarest and most desirable of all Colt semi-automatic pistols and are not seen at public sale very often. Provenance: The Milan J. Turk Collection

Very fine as factory refurbished. The pistol retains 98% of the bright factory blue finish with some wear on the muzzle end of the slide, thinning on the back strap, some minor scuffs and light scratches, and some light spotting on the front strap. The barrel retains 95% bright high polish blue finish with some thinning at the chamber. The grips are also very fine with a couple minor bruises, minor handling marks and sharp checkering. The hammer retains all of the original, slightly faded case colors. The markings (unless noted above) are crisp and clear, and most of the white highlight remains. Mechanically excellent. This is the finest example of a factory refurbished Colt Model 1907 Army Contract Pistol we have ever offered for auction. 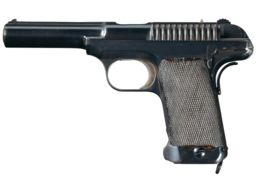 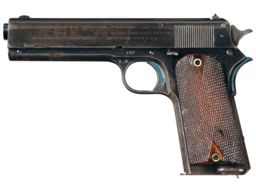 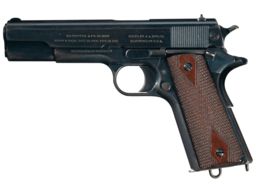 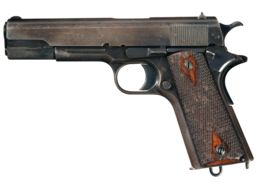 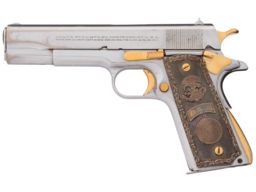 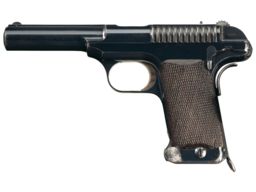