This is one of only five of these prototype training rifles, using an action based off of a Marlin Model 89 and resembling an M1 Garand, reported to have been manufactured at Marlin Firearms Company for U.S. Marine Corps trials; with all the examples numbered 1 through 5 and hand-fitted without parts interchangeability between them. In 1956, the U.S. Marine Corps invited a number of firearms companies to submit training rifles for evaluation in the development of a suitable rifle that would be used in the early stages of marksmanship with Marines. A list of requirements they were looking for in a potential .22 caliber training rifle including that the rifle must be semi-automatic, have a ten-round detachable box magazine, be fitted in a stock resembling the standard full-size .30 caliber U.S. M1 Garand rifle, be equipped to accept a military style 1 1/4" inch sling, windage and elevation adjustable sights with the same sight picture as the M1 rifle, easily operated manual safety, the ability to operate under numerous conditions, capability of firing 1,000 rounds continuously with minimal malfunctions, and the manufacturers were supposed to be able to ensure replacement parts. Marlin submitted all five rifles, and after trials the Marine Corps reported thirteen deficiencies they felt Marlin could rectify in the design of the rifles. After modification, the rifles were put through a second test conducted at Quantico and performed better with fewer malfunctions, although suffered from some failures to feed. The guns were returned by Marlin to Quantico a third time and performed well. In April 1958, Marlin was invited to bid on a 3,000 rifle semi-automatic training rifle contract, and their bid was not accepted. After trials, the Marine Corps ended up contracting with Harrington & Richardson for their MC-58 training rifles styled more similar to the then new in service standard full-sized M14 rifle. In September 1958, the Marine Corps kept the five Marlin training rifles then on loan. One of these rifles is pictured and described on pages 686-687 of Lieutenant Colonel William S. Brophy's book "Marlin Firearms" in which the book states, "It has been reported that some of them [of the five rifles made] were sold by the Corps and are now in the collecting world." Serial number "1" marked on top of the ring mount fixed on the front of the receiver and on the underside of the breech end of the barrel. "Marlin" inscribed on the base of the blued magazine. A small Marlin trademark "bull's-eye" is inset on the underside of the buttstock. Includes an olive drab green leather sling marked "MRT/JAN. 1953" in black letters. Provenance: The Milan J. Turk Collection

Excellent, retaining 97% original parkerized finish with some light scratches. Stock is very fine with attractive raised grains and scattered light scratches and handling marks. Mechanically excellent. This is a rare opportunity to acquire this spectacular prototype Marlin MC-58 training rifle built to resemble an M1 Garand and used in U.S. Marine Corps trials. This would make an excellent addition to any advanced U.S. Military arms collection! 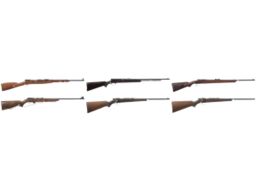 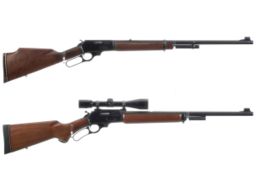 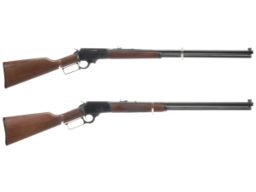 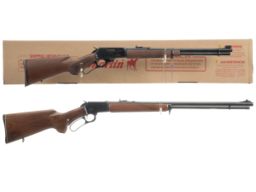 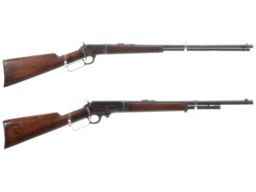 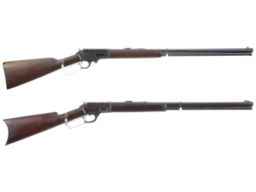