Double barrel wheellock pistols are very rare but are known to have been made for Emperor Charles V and others in the 16th century and early 17th century, and some examples have been noted as from the Saxon Electoral Armories in Dresden such as the pistol we sold in April 2016. This pistol was noted as "An Important Double-Barrrelled Pistol signed Christian Platz, circa 1570" on the title page of the "Catalogue of the Runes Collection of Important Firearms (Part I)" from Sotheby & Co. in 1964 and described within in lot 52. Subsequent consignor notes state it was in the Frank Bivens Collection. It is signed with a "CP" monogram on the upper barrel at the breech, and "CHRISTIAN PLATZ" and the Lignitz cross keys mark are on the inside of the fascinating double lock plate. The upper barrel is 13 3/8 inches, and the lower barrel is 10 5/8 inches. The barrels are rifled and have gilt panels of engraving in dotted floral scroll patterns, a post front sight, and three-leaf rear sight. The fire blued lock has gilt accents on the fittings including the pierced wheel covers which have serpent designs. The dogs also have engraved bestial motifs, and the stock has staghorn inlays engraved with mainly floral patterns along with figures on the left flat and the butt of the ball pommel, the former wearing a ruff and the latter in a helmet.

Extremely fine overall, with over half of the original gilt finish remaining, 30% fire blue finish remaining (strongest on the lock plate), mild wear, and generally crisp designs. The refinished stock is fine and has some repairs including on the underside at the breech, thin cracks, distinct designs on the inlays, and scattered dings and scratches. Lock not tested. 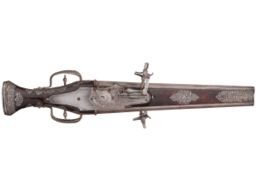 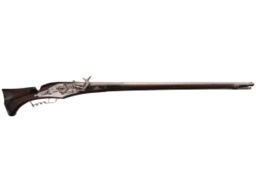 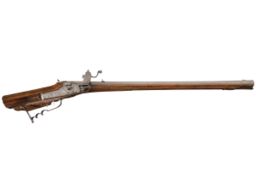 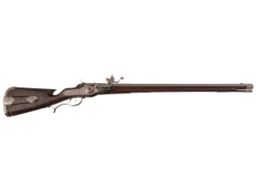 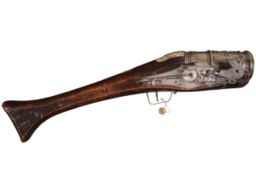