Originally manufactured by FMP in Portugal under license from Heckler & Koch and using H&K machinery. An included letter from Fred Vollmer of Vollmer Manufacturing lists the subsequent modifications as well as the history of this scarce rifle. Vollmer states that just prior to the import ban of 1994, he had imported a small number of Portuguese G3 receivers as well as approximately 350 sets of parts and the spare barrels needed to convert G3 receivers to the belt fed style seen on the HK21 automatic machine guns. He goes on to state that serial number "01", this example, was built on a Portuguese receiver, and that serial numbers 02-09 were sold at a premium over regular conversions. He says in the letter that only two semi-automatic conversions were ever manufactured, this example and another built on an H&K receiver, with all of the remaining parts sets being used in fully-automatic conversions to the HK21 pattern. Also included is a 1989 dated ATF assessment of the gun stating that because it was originally manufactured in semi-automatic configuration, it is considered a firearm and is not subject to Class III/NFA restrictions. The top of the receiver is marked with the serial number as well as "FMP M21 PORTUGAL", "0/1" marked trigger pack, and the right side of the lower receiver has the importer mark "PARS INTL/LOU.KY". The receiver shows the standard Vollmer style belt feed conversion seen on later examples produced by the company, but the conversion components appear unmarked. Apart from the belt feed mechanism, it features ventilated handguard with bipod rails (bipod not included), and a reconfigured receiver to accept quick-detach heavy barrels. It is fitted with hooded post front and adjustable 2-12 rear sights, birdcage flash hider, contoured pistol grip, and a fixed buttstock. Includes an extra heavyweight barrel and a number of lengths of non-disintegrating metal belts.

Excellent as converted, retains 99% plus of the matte black and matte grey finishes with a few scattered light handling marks. The grip and stock are also excellent with minimal handling marks. Mechanically excellent. 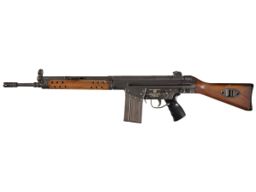 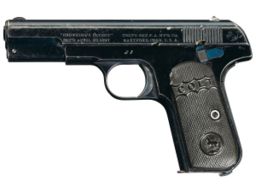 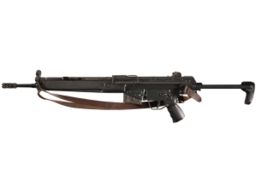 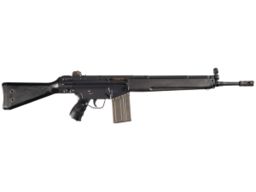 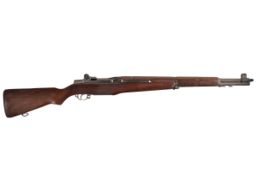 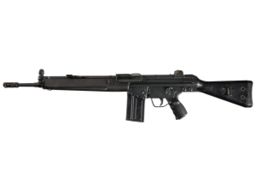