Manufactured in 1882 as a Third Model with integral dust cover rail and an early Second Model dust cover with a checkered thumb print grip area. This is one of approximately 300 Winchester Model 1876 muskets that were shipped to Hawaii, for originally arming the forces of the monarchy and later the Citizens' Guard of Hawaii after the monarchy was overthrown. This particular musket includes a rarely seen bayonet with a D-shaped guard which some sources associate with issue to the Royal Guard of the Hawaiian monarchy. Only 617 Model 1876 muskets are believed to have been made in total, with roughly half of them being shipped to Hawaii. This particular example is noted as having been shipped on 22 November 1882 in a large batch of Model 1876 muskets mostly in the 28000 serial number range, all of which were chambered in .45-75 W.C.F. The musket itself has standard markings and appears to lack the "C.G.H." markings that are sometimes seen on these Hawaiian issued muskets. It is fitted with a bayonet lug/blade front sight, saber bayonet lug on the right of the front barrel band, partially exposed cleaning rod on the left, folding ladder rear sight graduated 3-9, and sling swivels. It is mounted with a near full length, smooth forearm and a straight grip stock with a carbine/military style buttplate. Includes the previously mentioned bayonet which is similar in style to the other yataghan bayonets issued with Hawaiian muskets, including the brass grip with scale pattern, additionally having a D-shaped guard, similar to officers swords and cutlasses of the time, which has the appearance of being factory produced in its current configuration. The included factory letter confirms this Model 1876 was received in the warehouse on November 21, 1882 and shipped the next day in musket configuration.

Good, showing mostly a dark grey patina with some scattered patches of moderate pitting, most noticeably on the left side of the receiver. The wood is also good with two large repairs visible on the right of the buttstock, a smaller repair in the toe, a few insect type holes in the left, and otherwise mostly minor dings and scratches scattered throughout. Mechanically excellent. The bayonet is fair, the blade showing mostly a bright grey patina with some light pitting, the brass hilt showing an attractive aged patina, and the guard significantly bent inward with solder repair visible. A very rare Winchester Model 1876 musket variation that will be found only in the most extensive Winchester collections! 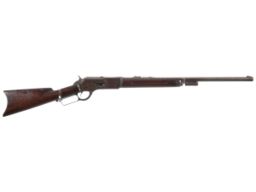 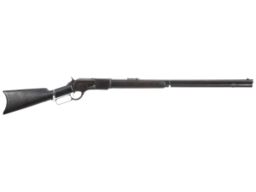 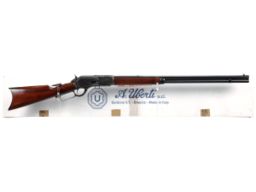 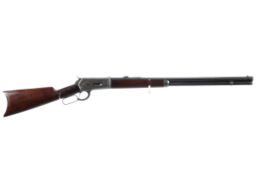 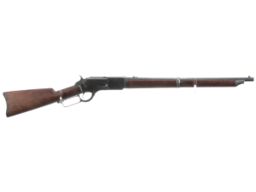 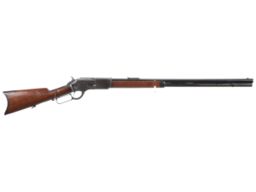