Elmer Merrifield Keith (1899-1984) was many things; a rancher, cowboy, big game hunter, prolific writer, shooting sports legend, and innovator in the world of magnum cartridges, responsible for the development of the iconic .357 Magnum, .44 Magnum, and .41 Magnum cartridges. During World War II, Keith was an inspector at the Ogden Arsenal and by the 1950s was a full time writer, serving on the staff of The Outdoorsman, The American Rifleman, Western Sportsman, Guns, and Guns and Ammo. He published several books including “Sixgun Cartridges and Loads,” “Big Game Rifles and Cartridges”, "Sixguns" and “Hell, I was There.” In 1934, Douglas Wesson of Smith & Wesson teamed up with Phil Sharpe and Keith to develop a new cartridge to compete with Colt's .38 Super Automatic. Taking full advantage of stronger revolver frames available by the 1920s, such as this Outdoorsman, Keith was instrumental in handloading a .38 Special cartridge far beyond its accepted limits. The result was the .357 Magnum, which was first introduced on the S&W Registered .357 Magnum Revolver, the most powerful handgun at the time. The high velocity cartridge quickly became a favorite caliber for law enforcement and a new breed of big game handgun hunters. The .357 is generally credited for starting the "Magnum Era," a period of time when larger calibers dominated the firearms market. In fact, Roy Jinks credited Keith as "the father of big bore handgunning." Keith went on to develop the .44 Magnum and .41 Magnum. The development of the .44 Magnum started as a joint venture between Smith & Wesson and Remington Arms Co. with Keith being the most outspoken advocate for such a big bore handgun cartridge. A firsthand account of his involvement in the development of the .44 Magnum is told by Keith in his autobiography “Hell, I was There!” starting on page 197. The dimensions for the then new .44 Magnum cartridge were finalized in 1954, and production of the “Most Powerful Handgun in the World,” the S&W .44 Magnum (Pre-29) Revolver, was introduced to the public in January 1956. The first production example serial no. S130942 was shipped to Julian Hatcher of the NRA. The fourth production revolver no. S147220 went to Elmer Keith. This is a later, but still first year production, S&W Pre-Model 29 that was presented to Keith by his friend and S&W President Carl Hellstrom who was encouraged by Keith to develop a revolver capable of loading the .44 Magnum. Per the included factory letter, this revolver with a 4 inch barrel, red ramp front sight, white outline rear sight, target hammer, target trigger, blue finish, and checkered Goncalo Alves target grips was shipped at no charge on November 16, 1956, to Elmer Keith, Salmon, Idaho. The engraving by George Dallas and carved presentation grips were added after the revolver left the factory. The included copy of the S&W invoice for this revolver also confirms the revolver was shipped to Keith. Finally, a copy of a page out of Keith’s gun collection ledger lists this gun by serial number with matching description as part of his collection, leaving no doubt that Elmer Keith owned this revolver. Two accompanying photos of Keith show him holding short barreled S&W Magnum revolvers. The first comes from an excerpt of an article written by Keith. This image shows Keith shooting a .44 Magnum and was the same image he used to head his monthly “Gun Notes” column for years. The second image is from an article written by Keith in the October 1959 issue of The American Legion Magazine. In this photo Keith holds two .44 Magnums. One of those pictured handguns may well be this revolver. In January 1969, Keith confirmed he had “four S&W .44 mags” and admitted, “I’d rather have my .44 mag and my loads on elk in the timber at close to reasonable range than any .30 caliber rifle. [This] may sound crazy, but I can get penetration from the sixgun, and [I] know what it will do.” Later that year Keith again spoke of his fondness of the .44 mag: “I carry a 4-inch .44 S&W mag all the time as an officers gun with my own handloads of 22 grains 2400 and Keith 250-grain bullet. As a choice between the two makes, I will take the S&W every time.” This revolver was pictured in an article pertaining “to owning a piece of Elmer Keith’s legend,” a reflection on Keith's personal collection going up for auction later that year, published in the April 2015 issue of Guns & Ammo (this issue is included). The Magna grips feature gold S&W monogram medallions, a gold inlaid presentation inscription shield engraved “PRESENTED TO/Elmer Keith/BY/Carl R. Hellstrom” on the left panel, and a relief carved American eagle on the right panel. George Dallas’ fine floral scroll engraving covers nearly all of the surfaces, and Dallas has signed his work “ENGRAVED BY GEORGE DALLAS” on the left grip strap. The side plate features an engraved facsimile of Keith’s signature. The left grip strap also marked with a S&W factory August 1959 (“8 59”) return date and S&W factory “B” diamond refinish mark which is repeated on the ejector shroud and cylinder under star ejector. The revolver is fitted with red ramp front and white outline adjustable rear sights as confirmed in the factory letter. Matching serial numbers are on the butt, cylinder, and ejector shroud. The engraving and presentation grips are certainly fitting for the man who made the .44 Mag a reality. The included floral tooled open top/open toe holster by the famous Bohlin Co. of Hollywood follows a design by Keith as it features a thumb strap for the revolver spur attached to a coil spring to maintain tension while also allowing for a quick release.

Exceptionally fine as a George Dallas engraved firearm presented to shooting sports legend Elmer Keith, retaining 97% of the S&W factory reapplied blue finish with muzzle wear and a light cylinder drag line. Nearly all of the case colors remain on the hammer and trigger. The grips are excellent with attractive grain, age lines and color along with a crisp carving. Mechanically excellent. The holster is fine. Keith owned and shot a great many revolvers, including others sold by Rock Island Auction, but this S&W .44 Magnum Revolver presented by S&W President Carl Hellstrom makes for a one-of-a-kind “piece of Elmer Keith’s legend.” 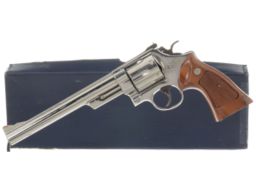 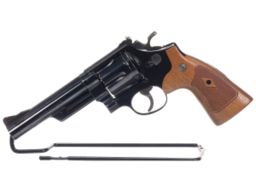 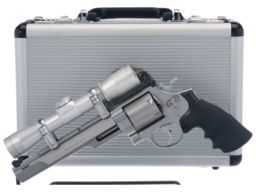 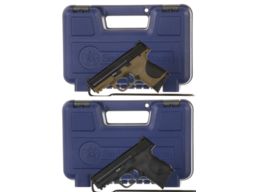 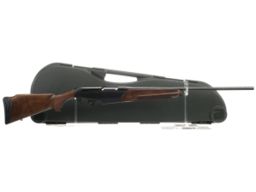 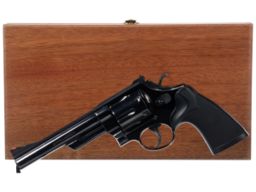