This Reconstruction era sword has a 33 inch blade with gilt classical martial and patriotic etching including "Union Forever" and a Clauberg maker's mark. The gilt brass hilt includes an eagle head finial, oak leaf and acorn patterns, "US," an spread wing eagle and shield and amethyst stones on the pommel, and twisted and plain wire wrapped silver grip, and silver scabbard with gilt brass fittings decorated with laurel and other floral patterns and "Presented to/Capt Elizur Cook/of the/National Blues/by his command/Sept. 11, 1868." inscribed above the upper band. Captain Elizur Cook of New Haven, Connecticut, is listed as the commander of Light Artillery Battery F "Drilling as Infantry, National Blues" in the "Annual Report of the Adjutant-General of the State of Connecticut" in 1869. "The Soldiers' Record" Vol. 1 No. 8 from Hartford, Connecticut, on August 29, 1868, indicates: "On Monday evening the National Blues of New Haven elected Elizur Cook Captain Vice-Shaw resigned..." He was born on August 14, 1833, and died on March 27, 1907. His obituary in "The Hartford Daily Courant" indicates he was a "well known citizen" and had a long career in the printing industry. After the Civil War, he worked as a clerk for General Colin M. Ingersoll, the state adjutant general based in New Haven before leaving to work for Case, Lockwood & Brainard in Hartford as a proofreader starting in June 1869. He remained working for them until his death. The obituary incorrectly states that he did not have an official claim to the title of "Captain Cook" not knowing he was briefly the captain of the National Blues.

Fine sword with traces of original gilding, mostly silver-gray patina on the blade, some mild oxidation and pitting, aged patina on the brass and silver, and mild overall age and storage related wear. The scabbard has been replated with mild pitting visible under the plating. Overall, this is a very attractive Reconstruction era presentation sword. 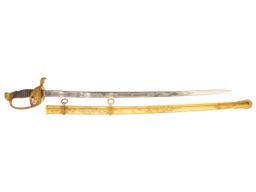 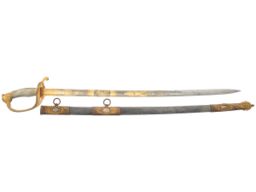 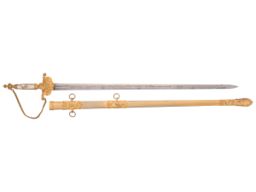 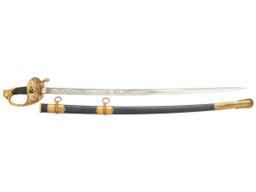 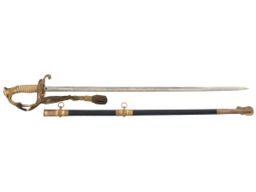 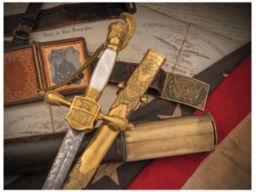