John Waters had shops in Birmingham and London in the late 18th century and early 19th century and is best remembered as for patenting a "snap bayonet" mechanism in 1781. Some Waters marked pistols like this one have been confused over the years with those made by the Waters family of gunmakers in Massachusetts. This pistol is similar to a British heavy dragoon pistol but is a commercial variant with obscured proofs, "WATERS" marked lock, fancier furniture that includes an acorn finial on the trigger guard, floral and border engraving, and a wrist escutcheon inscribed "LIEUT/M. SHANAHAN/RI." Lieutenant Michael Shanahan was previously identified as "an Officer on Wellington's Headquarters Staff in the Peninsula War in Portugal/Spain from 1808 until 1812. His role was as a scout to cross the lines to map the French positions...Unfortunately he was very badly wounded on assignment in 1812 and was returned to his home in Ireland where he was mustered out of the Army in 1813 and of course was not present at Waterloo unfortunately." His father, also Michael Shanahan (1731-1811), was a wealthy and well-known architect reportedly associated with the Duke of Wellington's family which was of Anglo-Irish heritage, and Lt. Shanahan is noted as having been appointed to oversee fortifications in County Cork. He was commissioned as an ensign in the Royal Staff Corps in 1803 and promoted to captain near the end of the Peninsular War in 1813 and left the army shortly there after.

Fine with mottled dark brown patina and mild oxidation on the barrel and lock, aged patina on the brass, and general mild wear. The stock is very good and has some chips, general scratches and dings, and a few repaired/stabilized cracks. Mechanically fine. 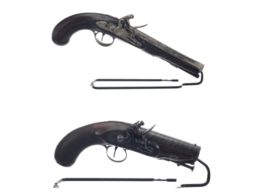 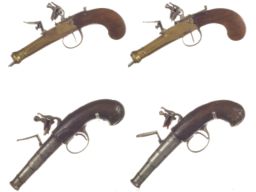 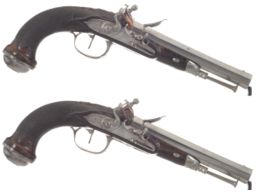 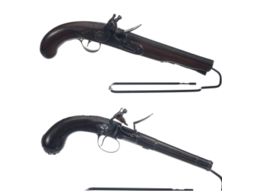 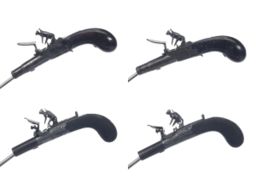 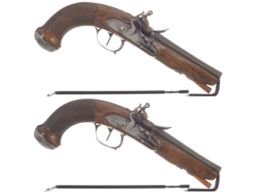