Jack "Machine Gun Jack" McGurn (1902-1936) was born Vincenzo Antonio Gibaldi in Sicily in 1902. Shortly after he immigrated through Ellis Island with his mother, joining his father in New York. He grew up in Brooklyn, later moving to Chicago at the age of 14, where he began a career in boxing, changing his name to Jack McGurn, as fighters with Irish names got better fight bookings. McGurn's father died while he was still young, and his mother's second husband was murdered by Black Hand extortionists, who belittled the man for being a "nickel and dimer", setting young Jack on a vengeful path that would lead him into the notorious Chicago Outfit. Interestingly, McGurn was already on the Outfit's payroll at the time of his stepfather's murder; however, this was likely due to having been noticed for his boxing prowess, rather than his skill with a machine gun. McGurn was introduced to Al Capone, head of the Chicago Outfit, around 1923, shortly after he had successfully tracked down all three of his stepfather's killers and "whacked" them. After killing them he placed a nickel in each of their hands, an homage to their insults towards his stepfather; and a move that would later become one of his trademarks. Jack went on to become one of the Outfit's most notorious hitmen, a "made man", and a capo, killing Earl “Hymie” Weiss in 1926, and cutting comedian and singer Joe E. Lewis' throat during a failed persuasion attempt in 1927. In 1929, he was one of the masterminds behind the St. Valentine's Day Massacre, with some even claiming he was one of the trigger-men, though it was never proven, in part due to his wife and "blonde alibi", Louise Rolfe, who said they had spent the whole day together. In 1930, McGurn was listed as number four on Chicago's list of "Public Enemies" which was circulated nationwide, leading to him being shunned from the Outfit to avoid the heat. McGurn began frequenting the Evergreen Country Club in Evergreen Park, which was owned by Frank Ahern, and later became a silent partner in the business. Ahern became acquainted with McGurn during this time, along with other gangsters involved in the Outfit. Included provenance in the display case with the pistol states that it was during this time in 1936 that McGurn presented the pistol to Ahern for protection after a holdup at the club which was not believed to be mob related. It also states that Frank Ahern never did confirm what the three notches cut into the left grip panel represented. McGurn tried a short stint in golf, but couldn't seem to shake his past, being relentlessly followed by police, and in 1936 he was gunned down by three unknown men in a bowling alley. Though the murders were never solved, they are believed to have either been a revenge killing ordered by Irish mob boss, George "Bugs" Moran, or a killing carried out by his own Outfit due to becoming a liability, and the killers placed a nickel in "Machine Gun" Jack McGurn's hand. Two notarized documents included in the lot state that the information presented along with this gun is true and accurate. One of these documents is signed by Anna May Ahern, sister of Frank Ahern, and one by his nephew, Robert E. Graham. The pistol itself is in a large display case with information regarding the provenance of the pistol on the left, the story of McGurn's life on the right, and a picture of his body shortly after his murder at the top center. Manufactured from 1916 to 1924, the pistol appears to have standard markings and features in addition to the three carved notches at the bottom of the left grip panel. The pistol was not removed from the case for further assessment. The frame measures 20 x 32 3/8 inches. Also included with the lot is a framed full newspaper page covering many aspects of McGurn's life and career in crime.

Fine as assessed without removing from the display, appears to retain approximately 80% of the original blue finish with the balance having thinned to a smooth grey patina and a few scattered patches of light pitting. The left grip panel appears very fine with some light handling marks and the three notches as noted. Mechanically untested. Both frames are very fine with minimal handling/storage wear. A very interesting piece attributed to "Machine Gun Jack" McGurn and Chicago organized crime! 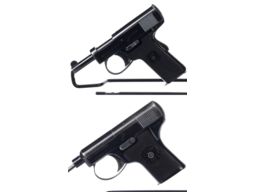 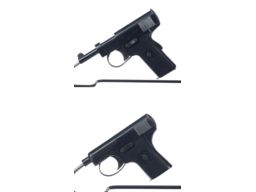 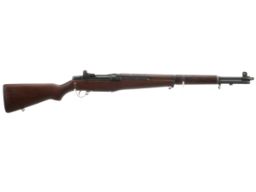 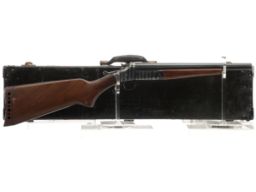 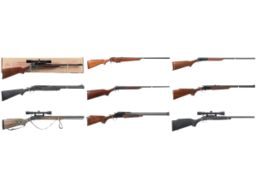 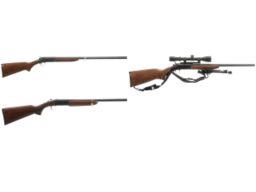