Extremely popular among people from all walks of life on the western frontier, the Winchester Model 1873 has become one of the iconic weapons of the Old West. A large part of their popularity, along with that of the Single Action Army revolver, was that the two weapons could be paired in the same caliber, allowing those that trusted them for protection to only carry one type of ammunition. Along with this, the saddle ring carbine, like this example, packed a large amount of firepower in a small package that could easily be carried in a scabbard on a saddle or across a rider's lap while on horseback. The Model 1873 is often referred to as one of the guns "that won the west", and this example, manufactured in 1900, certainly has the look of having earned that moniker. The top of the barrel is marked with the standard two-line address/King's patent marking and "38 W.C.F." at the breech, while the bottom of the cartridge elevator is marked "38 CAL." The model designation is marked on the upper tang and the serial number is on the lower tang. It is fitted with blade front and folding ladder rear sights. It's mounted with a smooth forearm and straight grip stock with a trapdoor carbine buttplate (cleaning rod not included).

Good, showing mostly a smooth brown patina with some scattered patches of light surface pitting/oxidation, the look of an honest, working man's gun, that saw years of duty on the frontier. The wood is also good showing similar western character to the metal with scatter minor dings and a few hairline cracks, a physical record of the miles it traveled. Mechanically excellent. 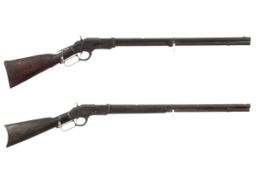 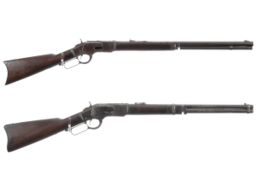 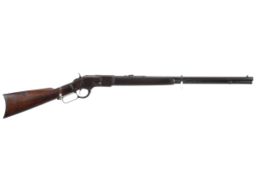 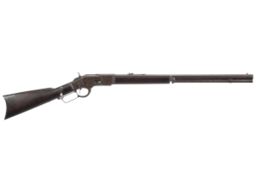 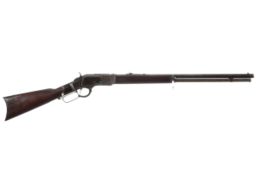 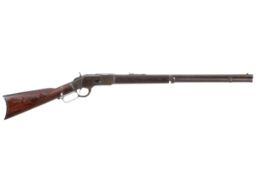