This is one of only approximately 500 Model 1840 Type I carbines reportedly manufactured by Simeon North in 1840 under contract with the U.S. Government based on John H. Hall's patented breech loading design. North is easily one of the most important gunmakers of the early republic and manufactured U.S. martial arms from 1799 until his death in 1852. This rare Model 1840 Type I Hall carbine features an "L" shaped elbow breech lever mounted on the trigger plate, unlike the "fishtail" lever on the subsequent Type II carbines. It retains its original smooth bore and has a fixed blade front sight and V notch rear sight. Interestingly, this example features a ramrod bayonet and a 26 3/16 inch barrel length as usually seen on a Model 1833 Hall carbine; the limited surviving examples of these Model 1840 Type I carbines are typically seen with a 21 inch barrel and a standard cleaning rod. It should be noted that this specific Hall variation is not acknowledged in "Flayderman's Guide" but an article exists, American Society of Arms Collectors Bulletin Number 54 (Spring, 1986), titled "The Model 1833 North/Hall Carbine, Type III" in which the author was aware of nine specimens of this configuration extant at the time of writing, and also indicates that he believes these were likely included as delivered under the same contract of 500 Model 1840 Type I carbines of the type mentioned in Flayderman’s. "U.S/S. NORTH/MIDLtn/CONN./1840" marked breech block. "NWP" (Nahum W. Patch) inspection initials marked on the left breech end of the barrel, an oval script "NWP" inspection cartouche marked on the left stock flat, and a very faint oval inspection cartouche visible ahead of the buttplate tang that is likely "MPL" (Mann Paige Lomax). A sling ring is fitted near the end of the trigger guard tang. "83" marked on top of the buttplate. "IDHHJ" carved into the left stock flat, initials "DEG" carved into the left of the buttstock, and initials "T.O.S" behind a diamond and "M" carved into the right of the buttstock. This is only the second example of its kind sold by Rock Island Auction Company!

Good, exhibiting artificially aged brown patina on the barrel and scattered moderate pitting overall, refinished blue finish visible on the front barrel band and ramrod bayonet retainer, and nice markings in the metal. Stock is also good with a replacement forend, scattered dents, chips, scratches, cracks, a large period repaired cracked section behind the left rear of the receiver held in with two nails, an absent cracked section behind the right rear of the receiver, period carved initials as mentioned above, and a visible cartouche on the left flat. Mechanically excellent. Due to hard period use, these Model 1840 Type I Hall carbines rarely turn up in any condition and this is a rare opportunity to acquire one with a ramrod bayonet! 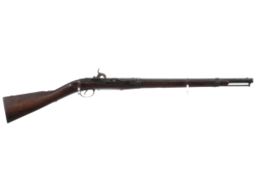 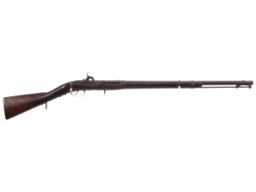 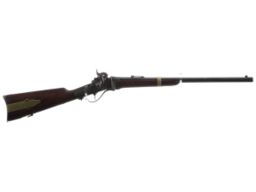 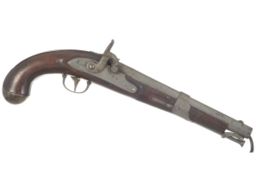 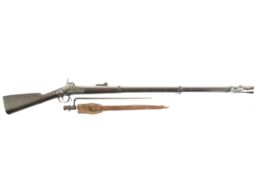 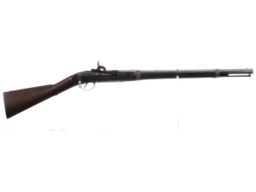