An estimated 100,000 in total of these Colt special rifle-muskets were manufactured throughout the Civil War under contract with the Union and state governments. This model is based on the Enfield Pattern 1853 and has many features that were subsequently incorporated into the Springfield Model 1863 rifle-musket. This example has standard markings and features with an "1864" dated lock and "1863" dated barrel, "E.P.R" inspection initials on the left barrel flat at the breech, and two boxed script inspection cartouches including "MH" (Michael Hayes) and another (illegible) on the left stock flat. The barrel is fitted with a blued rear sight with two folding leaves graduated to 500 yards. Includes "US" socket bayonet.

Very good, exhibiting clear markings in the metal with scattered light to moderate freckling and a smooth light brown patina. Stock is also very good with defined edges, numerous scattered dents and scratches, moderate chips in the edges of the ramrod channel, minor chips ahead of the trigger guard tang and around the rear lock screw, a minor crack on either end of the lock, and a small re-glued chip ahead of the trigger guard tang. Mechanically excellent. Included bayonet is also very good with scattered light pitting and defined edges on the blade and smooth light brown patina. 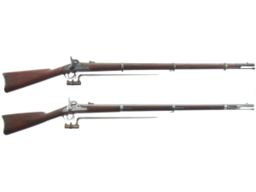 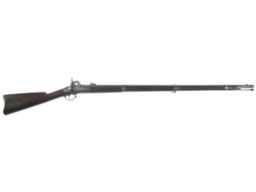 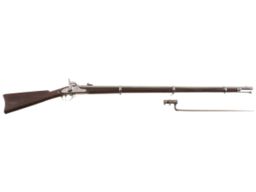 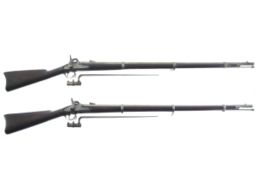 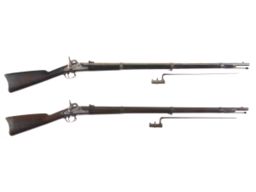