This incredibly ornate and rare dated German wheellock sporting rifle has a maker's mark of "MM" and a man on the barrel and lock that is listed in "Der Neue Stockel" as likely from a Regensburg maker of wheellock rifles c. 1580-1610 which fits the "1597" date on the stock inlay on the bottom ahead of the lock which is also engraved with "S.W.V.P." and a coat of arms. The swamped octagon barrel has round bottom, eight-groove rifling as well as blade and notch sights and a beaded border at the breech. The lock has a floral border and scroll engraving etched wheel along with an interesting pan cover that pivots rather than slides back and forth. The rifle has adjustable double set triggers and an extended finger groove trigger guard of iron. The stocks is what really sets the rifle apart and is essentially embellished along all of the visible surfaces. The wood itself has extensive relief carved German floral scroll patterns along with a hunter and dogs pursuing a hare on the upper right side of the butt, a large portrait of a man with a sword on his hip on the underside of the breech section, an extensive and highly detailed set of scenes of hunters and dogs in the woods on a deer hunt running along the left stock flat and butt, chevron floral patterns along the sides of the ramrod channel, and scaled patterns on the underside of the cheekpiece. The rifle also has antique ivory/stag-horn borders and inlays, including a nude classical female figure on the ramrod pipe, the noted plate on the bottom, a scene of two loves into he woods with an estate in the background on the patchbox lid, three masks bordering the barrel tang, and additional mask and floral elements. The buttplate is translucent horn. The rifle can be seen on-line in the William Randolph Hearst Archive at LIU where it is noted as purchased by Hearst from the Samuel Austin Sale through American Art Association, April 26, 1917. Notes in the patch box list this rifle as exhibited at the Chicago World's Fair in 1893 and has been part of the collections of Richard Zschille, Samuel H. Austen, William Randolph Hearst, and Joe Kindig Jr. Outside of this note, the rifle is known to have been subsequently owned by Ray Petry, and Dr. Douglas Sirkin. The maker's marks was incorrectly noted those of Peter Opel when sold as part of Sirkin's collection. Provenance: The Tom Lewis Collection

Very good metal with light silver-gray patina and mild pitting, some fading on the engraving on the lock, and mild overall wear. The restored stock is fine and has fairly mild wear. There are a few stag-horn inlays that are expertly made replacements, including the face to the left of the barrel tang which was done by Master Engraver Dan Cullity. Without very careful examination, these replacements are very difficult to detect. The lock has not been tested. This is a very fine, high art wheellock rifle, and a rare dated example at that, and will make a fine addition to a collection of deluxe antique arms or art. 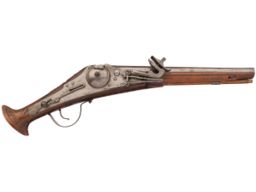 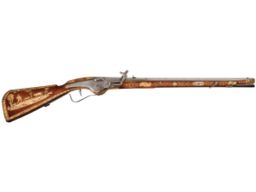 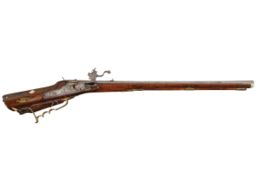 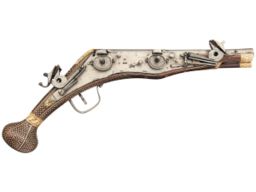 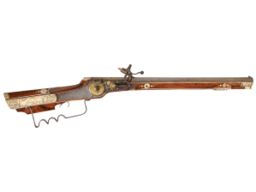 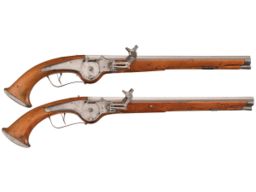