Documented Cased D.G.F.M.-(F.M.A.P.)/Colt Modelo 1927/1911A1 Semi-Automatic Pistol Upgraded to National Match Configuration with .38 Super and .22 LR Conversion Kits Attributed as Requested by General Simler for General LeMay, Both of the U.S. Air Force

Documented Cased D.G.F.M.-(F.M.A.P.)/Colt Modelo 1927/1911A1 Semi-Automatic Pistol Upgraded to National Match Configuration with .38 Super and .22 LR Conversion Kits Attributed as Requested by General Simler for General LeMay, Both of the U.S. Air Force

An included copy of a letter on Department of the Air Force letterhead states that on 7 July 1968 General George B. Simmler [sic] authorized an air force facility (Gunsmith Div./MMS) to carry out certain modifications on a personal firearm of his, which is listed as "Colt Pistol M1911A1, Cal. 45. Serial # 33041". The specific modifications are listed as: "Rebuild to Match Grade Specification as outlined in T.O. 11W3-3-3-14 and fit Colt 38 Super and Colt Ace 22LR Slide assemblies to component #33041 with minimum tolerances, to insure proper functioning and accuracy." and it also states that these items were to be fitted in a special case provided by General Simler, and that the work was carried out by Pistol Section and supervised by M/SGT. B.J. Bjorlund. That letter is signed by USAF Colonel James A. Wolmers, Chief Gunsmith Div/MMS. An included copy of a letter on Patrick D. Burke attorney at law letterhead, who states that he was the attorney for General George B. Simler's estate, and that the general's wife states that the set was originally requested for presentation to General Curtis E. LeMay in the summer of 1968. It goes on to state that the USAF gave the go-ahead to the project with the stipulation that it would be at no cost to them and the set was presented to General LeMay in August 1968; however, it was meant to be returned later in the week as General Simler's name had been mispelled on the presentation case plate. The USAF rescinded the authorization of the presentation in their name, leading General LeMay to accept the set in name only while leaving it at Randolph Air Force Base until the issue with the name plate and presentation could be sorted out. Interestingly, in both of these previously discussed letters, General Simler's name is misspelled as "Simmler". Also included is extensive information regarding the two generals discussed above, as well as the plane crash that killed General Simler in 1972. The pistol appears to be an Argentine D.G.F.M.-(F.M.A.P.) manufactured Model 1927 frame dated to 1946, fitted with a Colt Government Model slide and upgraded generally speaking to National Match configuration. Both the barrel and barrel bushing bear standard National Match markings. Also included in the set is a Colt .38 Super slide assembly and magazine, a Colt Ace .22 LR slide assembly and magazine, a barrel bushing wrench, a screwdriver, and three boxes of cartridges, one each of the calibers mentioned above, that each appear to contain their full compliment of cartridges. All of these accessories are housed in a fitted case with USAF badge on the outside lid and a USAF patch attached to the interior of the lid.

Very fine as Air Force gunsmith upgraded to National Match style configuration and combined as a set, retains 95% plus blue finish on the pistol and both slide assemblies with some moderately softened markings on the frame and the Ace slide, but most other markings crisp. The grips are excellent with only the slightest handling marks. Mechanically excellent. The case is very fine with some scattered light handling/storage marks. 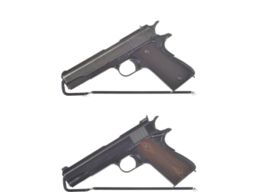 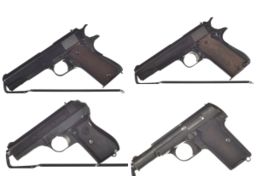 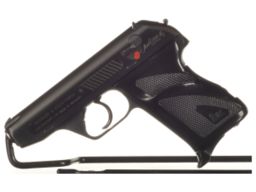 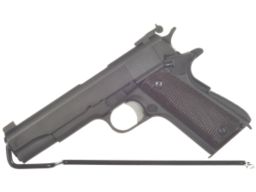 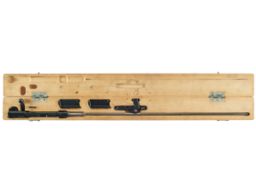 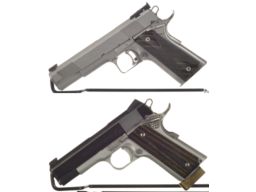