This is a rare variation of the six-shot Mauser Model 1896 Cone Hammer Broomhandle Pistol. This was the last variation of the early six-shot Mauser pistol that features the 4 3/4 inch short barrel and the scarce fixed rear sight, making it a much handier pistol than the earlier models. Predating the more widespread "Bolo" Mauser, the six-shot follows similar design principles in an attempt to make a handier weapon, reducing overall weight and dimensions, including knocking off a significant amount of the frame. The end result has an unloaded weight about 7 ounces less than the standard Broomhandle, and a profile quite distinct from most Broomhandle variants. This example has early features such as the long extractor, dovetailed firing pin retainer and the narrow back strap cut for a shoulder stock. The chamber area is marked "WAFFENFABRIK/MAUSER/OBERNDORF A/N". The left of the chamber is stamped with a "crown/crown/U" proofs, and the right has an early "Antler" proofmark from the Ulm proof house in Germany. The underside of the barrel has various Mauser single letter proofmarks. It has the large milled panels on each side of the receiver, with the milled/profiled magazine floor plate with the exposed detent button. It has the standard fixed blade front and notch rear sights. It has a blued metal finish with the breech bolt and hammer in the white and the straw colored trigger. The extractor, bolt stop and firing pin retainer are all heat blued. The matching serial number is marked on various components. Fitted with a set of walnut grips with 23 grooves and a lanyard ring on the underside of the butt. According to consignor, their father brought this pistol back from World War II. 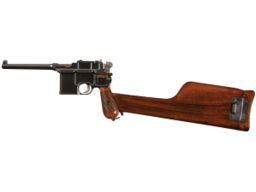 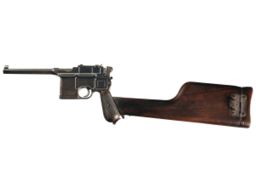 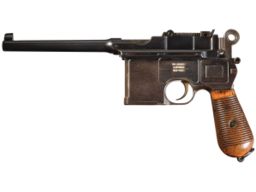 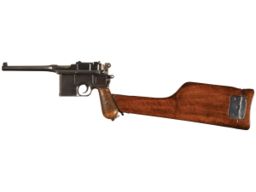 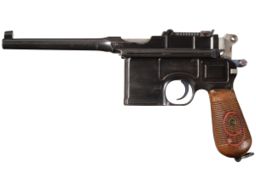 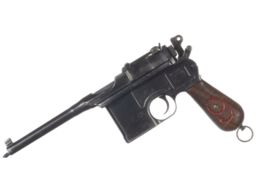