The Perry breech loaders were designed by Alonzo D. Perry and manufactured by the Perry Patent Arms Co. around the mid-1850s in limited numbers (estimated under 1,500) and multiple variations, including pistols, carbines, sporting rifles, and double rifles. The company was incorporated on July 15, 1853, and the rifles were still being advertised in Alabama by C. Suter at least as late as December of 1861. The barrels for the rifles have been seen with different barrel makers'' marks. This one has a partial "HITCHCOCK & MUZZY/CAST-STEEL" stamp on the bottom. It has a primer tube inserted through the stock that feeds primers through the back of the frame. This classic sporting rifle also has a blade front sight, notch rear sight, German silver wedge escutcheons and pewter forend cap on the forend, the matching "A.D. PERRY/PATENTED/1855" and "PERRY PATENT ARN Co [sic]/NEWARK N.J." on the breech block, and plain buttstock. The barrel and frame at the breech, left side of the lever, wedge (4 repeated), and forearm (pencil in channel and stamped on tail edge) are all marked with the matching serial number.

Good with areas of original blue in the protected areas, dark brown and gray patina throughout, some minor oxidation and light pitting, and general mild wear. The wood is fair and has general minor scratches and dings, a smooth oiled finish, a few flecks of white paint, chips at the upper corners of the wrist, and a long sliver absent from the upper left edge of the forearm. Mechanically fine. 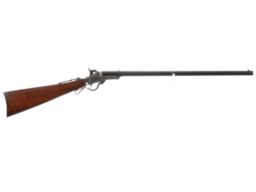 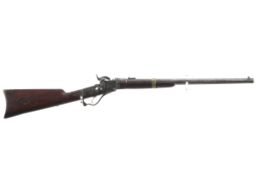 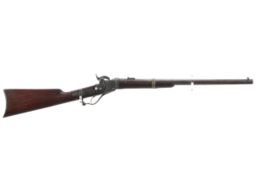 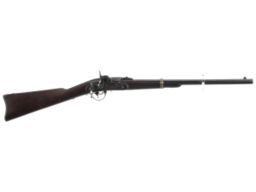 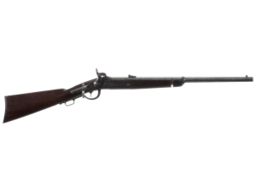 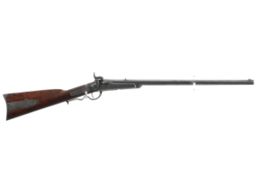