This Henry rifle was manufactured by the New Haven Arms Company in November 1864. The rifle features a brass receiver that lacks the alternate rear sight dovetail, brass buttplate with pointed heel, blade front sight with squared back, and folding ladder rear sight graduated to 900 yards. There is a buttstock swivel and screw fastened sling hook loop on the left side of the barrel that carry a reproduction Henry's patent leather sling. This sling is marked "HENRY'S REPEATING RIFLE/PATENTED OCT.16, 1860." The top barrel flat is roll stamped with the two-line legend ahead of the rear sight: "HENRY'S PATENT OCT. 16. 1860/MANUFACT'D BY THE NEWHAVEN ARMS CO. NEWHAVEN. CT." The matching serial number is stamped on the top barrel flat at the breech, left side of the lower tang, stock inlet, and buttplate. The tang screws are, correctly, not stamped with the rifle serial number. Although the federal government purchased just over 1,700 Henry rifles during the Civil War and only one regiment, the 1st District of Columbia Cavalry, was fully armed with Henry rifles, experts believe that the majority of the approximately 9,000 Henry rifles manufactured between April 1862 and April 1865 saw service during the Civil War as privately purchased weapons. Federal soldiers, particularly in 'Western' regiments from Illinois, Indiana, Michigan and Kentucky appreciated the firepower offered by the Henry lever action and were willing to spend their pay for the most advanced rifle available during the war. Several Western regiments were armed primarily with privately purchased henry rifles by the end of the Civil War. This specific rifle, number 7359, is between numbers 7355 and 7365 documented on page 75 of "The Historic Henry Rifle" by Wiley Sword. A solid representative example of a Civil War era New Haven Arms Henry Rifle with the quality reproduction Henry's patent marked leather sling that has all of the character of being a true working gun of the period.

Very good for a Henry Rifle showing authentic use with the barrel and magazine having an as found smooth dark patina. The brass receiver and buttplate have an attractive mellow appearance. The fine receiver has tight fitting side plates. The stock is very good and it wears its scars with pride. The leather sling is fine. Mechanically excellent. 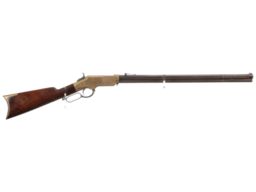 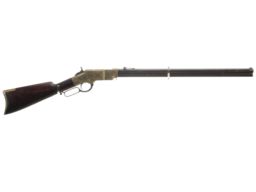 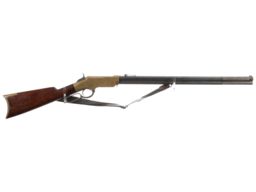 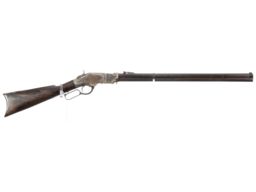 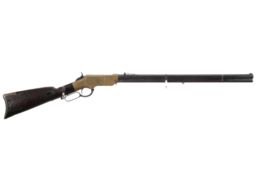 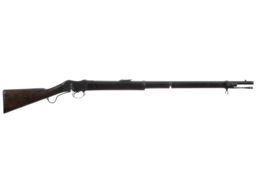