Charles E. Billings (1834-1920) was an innovative mechanic influential in drop forging and worked for Colt in the 1850s, Remington in the 1860s, and then the Weed Sewing Machine Company after the Civil War. He and Christopher Spencer of Spencer repeating rifle fame created the short lived Roper Repeating Arms Company which then became Billings & Spencer Co. in Hartford in 1873. The latter manufactured a wide variety of metal goods, including Billings's rifles and tools of his design. This rifle pattern was patented on November 2, 1875. He was the president of the American Society of Mechanical Engineers in the mid-1890s. Billings & Spencer Co. was still manufacturing rifle barrels during World War I and was a leading tool manufacturer in the 20th century. The rifle has a combination blade globe front sight, a Spencer rifle style notch and ladder rear sight, "538" on the bottom at the breech, and the serial number repeated inside the walnut forearm which has a pewter cap. The casehardened breechblock is stamped "C.E. BILLINGS," and the nickel frame has "C.E. Billings/Patd. Nov. 2d. 1875." in ornate jeweler script. The upper tang has taps for mounting a peep sight. The shotgun style buttstock has a smooth steel buttplate and is nicely figured, fancy grade walnut.

Very fine. The barrel retains 85% of the original bright blue finish. The action retains 95% of the original nickel finish which has an attractive age "frosted" appearance and some casting flaws underneath. The inscription remains crisp. The trapdoor has mottled gray and brown casehardened patterns. There are some general minor dings and scratches on the metal. The wood retains nearly all of the glossy original varnish, displays stunning figure, and has only minor dings and scratches. Mechanically excellent. You will very rarely get the chance to see one of these scarce rifles, let alone an opportunity to get your hands on one as fine as this. Do not miss this incredible opportunity! 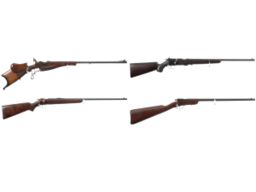 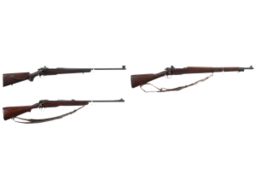 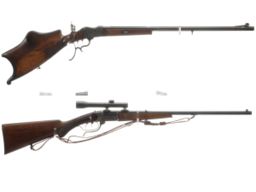 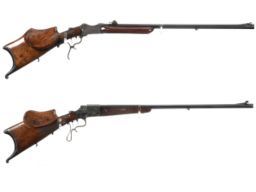 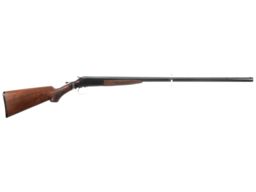 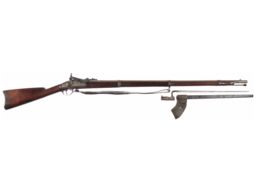