Only 1,000 Model 1884 experimental rifles were manufactured circa 1886 with hooded front sights and ramrod bayonets in the 320,000 serial number range. The ramrod bayonet concept was further developed and used on approximately 65,000 Model 1888 trapdoors as well as the early Springfield Model 1903 rifles. The idea was to create a system that did not require a soldier to carry another piece of equipment, but the concept had its critics including Theodore Roosevelt who told the Ordnance Department, "I must say that I think that ramrod bayonet is about as poor an invention as I ever saw." This rifle has the experimental Model 1884 front sight, a standard Buffington rear sight, the Model 1888 rod latch mechanism and ramrod bayonet, is numbered in the early Model 1879 range, and has an "SWP" cartouche dated "1891" on the left stock flat. It is fitted with a period leather sling.

Fine as assembled. 85% of the arsenal blue finish remains with patches of light oxidation and brown patina. The breechblock retains nearly all of the rich case colors. The stock is very fine with a few dents and light scratches. The markings are distinct throughout including the stock cartouche. Mechanically fine. The sling is very good with some minor rub wear and crackling. 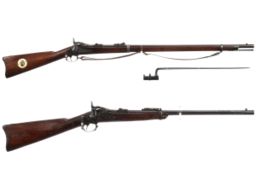 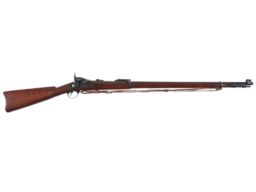 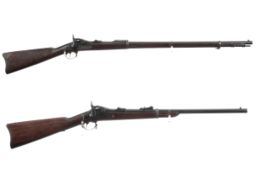 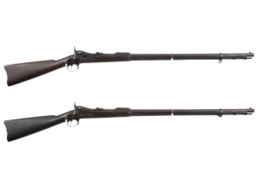 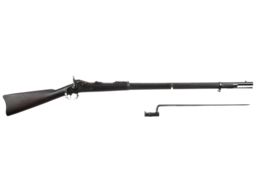 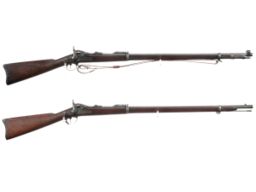