Developed in the 1920s/1930s, the Mk VI Enfield was part of a series of trials intended to replace or upgrade the Short-Magazine Lee Enfield as a result of observations during World War One. Among other changes, the Mk VI integrated a heavier barrel for better performance during sustained fire, a lighter nose cap to offset the gain in the barrel, and a set of integral mounting lugs on the barrel to preserve bayonet/launcher functionality, while retaining the receiver mounted "battle sight" introduced with the Mk V rifle. Many of the features tested on the Mk VI would be integrated into the No. Mk I 4 SMLE, which was Great Britain's go-to infantry rifle for World War II. Blade front and folding peep ladder rear sights, with the left side of the socket hand-stamped "ENFIELD/1930/NO.1.MK.V1(sic)/A0187", "crown/GP" and "ENGLAND" marked on the right side of the chamber, sliding magazine cutoff, and a section dished out of the left side of the receiver to ease access to the safety. Matching numbers are present on the bolt and magazine, the latter with an opening cut into the bottom. The stock follows the traditional SMLE profile, with the addition of deep and broad checkering on the forearm and a smooth brass buttplate.

Very fine as arsenal refurbished, with 90% of the current blue, showing areas of covered pitting, patches of brown patina, and mild handling marks overall. The stock is very fine, with some light scratches and dings. Mechanically excellent. 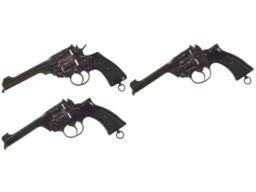 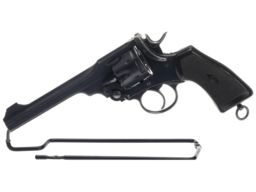 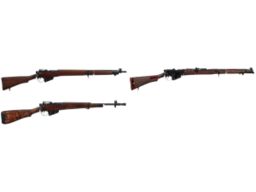 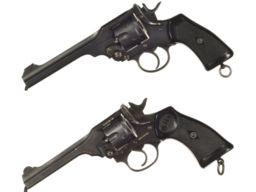 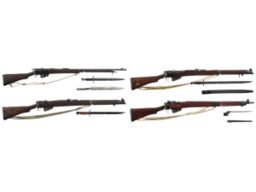 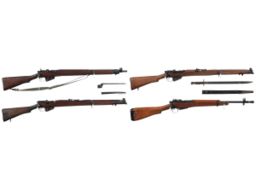