This likely one-off prototype breech loading percussion saddle ring carbine was invented by Henry Gross and covered under U.S. patent number 15,072 originally granted June 10th, 1856. It is fitted with a Civil War era Gwyn & Campbell carbine barrel, with ladder rear sight graduated to 600 yards with a 700 yard notch at the top, Edward Maynard's patented tape primer mechanism is located on the lock with "U.S.A." and an eagle and shield engraved on the primer door, a hammer that somewhat resembles a U.S. Springfield Model 1855/1861 rifle-musket, and is mounted in a walnut forend and buttstock with brass buttplate. The trigger guard breech lever latches at the rear with a trigger. Upon lowering the lever, the gas sealing breech block slides backward a tenth of an inch prior to tilting upwards for loading. "4379" and "A&CO" marked on the bottom of the barrel at the breech, and "PT" and "R" marked on the left breech flat of the barrel. This exact Gross patent carbine is pictured on page 490 of "The William M. Locke Collection" book in which it states, "These carbines were made for the trials of 1865. Gross also invented the Gwyn & Campbell carbine. The barrel on this carbine appears to be from one of those." Provenance: The William M. Locke Collection; Property of a Gentleman

Fine, retains 70% period applied blue finish on the barrel, with mostly smooth gray patina on the frame with traces of case colors visible on the lock and in protected areas on the breech block, with some scattered areas of light pitting. Wood is also fine with some scattered light scratches and dings. Mechanically excellent. 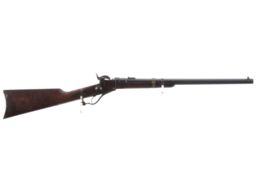 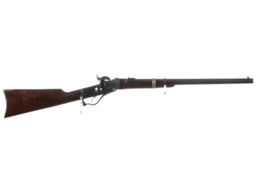 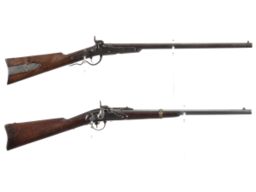 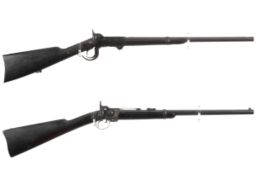 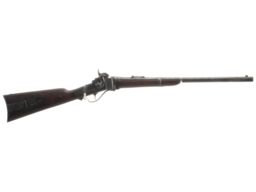 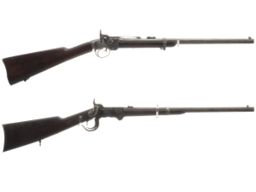