Named for its designer, Captain H. C. Boys, the Boys anti-tank rifle was originally developed in the mid-1930s and was put to use in the early stages of World War II; soon rendered obsolete for its original duty of tank hunting in the European Theater as rapid advancements in tank armor proved effective against the .55 Boys cartridge. That said, the rifle was still put to good service throughout World War II against armored cars, enemy equipment, and snipers in cover too sturdy to punch through with conventional weapons, essentially becoming anti-material rifles decades before the term would be coined. They were used by Finland, who received material support from Allied nations during the Winter War against the Soviet Union, and many saw use by the British in North Africa against the Germans (the previous British manufactured Mk I examples). But while this was going on, the Boys rifle also found an audience with the United States Marine Corps, and examples such as this one were manufactured by Inglis in Canada on contract with the United States. Some of these saw successful use by the U.S. Marines against the Japanese in the Pacific. The tanks and small armored vehicles of the Imperial Japanese Army were less sophisticated when compared with their German counterparts and were ideal prey for the Boys rifle as were any light fortifications they came across. During the Raid on Makin Island, the U.S. Marine Raiders successfully destroyed two Japanese seaplanes carrying reinforcements on the water using a pair of Boys anti-tank rifles from land. "U.S. GOVt. PROPERTY", "R.B. Mk I" and "4T1709/INGLIS/1943" marked on the left of the receiver. The barrel is new construction in 50 caliber, fitted with a Mk I* pattern rectangular flash hider and left-offset blade front sight, with a corresponding offset fixed peep rear sight on the receiver, which takes a top-loading detachable five-round box magazine and is fitted into a shock-absorbing stock assembly with a folding bipod, dual pistol grips, hardwood cheekpiece and an alloy buttplate with rubber-covered shoulder pad and a built-in oiler. Included with the lot is a period olive drab green painted metal magazine box with white painted letters "BOX, MAGAZINES/RIFLE,BOYS,Mk I" holding five extra .50 BMG caliber modified magazines and two extra unmodified .55 boys caliber magazines, a canvas receiver cover, and assorted small parts and tools.

Very fine as rebarreled to .50 BMG caliber, with 95% plus high polish blue on the barrel, 90% of the arsenal refinished parkerization on the receiver with some mild spotting, and 90% of the black finish on the stock assembly applied over patches of pitting. The grips and stock are in fine order. Mechanically excellent. 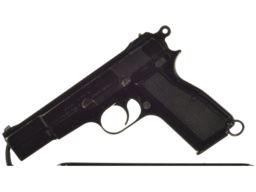 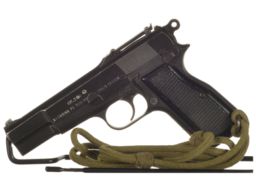 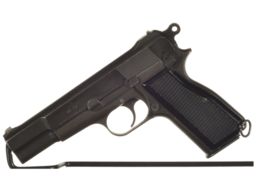 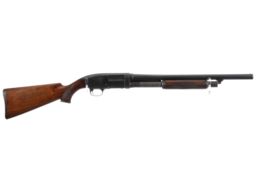 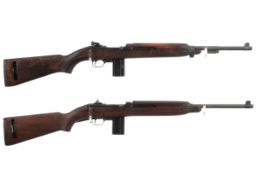 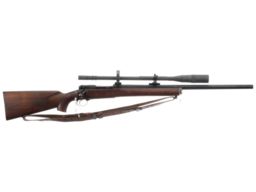