Manufactured in 1891, this Model 1886 is chambered in the very desirable 50 Express caliber and made for the European market. The top of the barrel is marked with the two line address ahead of the rear sight and marked "MADE FOR./P. ORR & SONS, MADRAS.". At the breech. P. Orrs & Sons is an old store that primarily made clocks in Chennai, started by Peter Orr in 1846 on the foundation of the nascent George Gordon & Co. The first showroom was opened at Anna Salia in 1879 and was inaugurated by Price George, Duke of York who later became King George V, and Princess Mary of Teck, who later became Queen Mary. The establishment was sold to Karumuthu Thiagarajar Chettiar in 1967. In 1749 the British regained control of Fort St. George and Madras and in the latter half of the 18th Century it became an important British naval base and the administrative center of the growing British dominions in Southern India. The development of the harbor in Madras led the city to become an important center for trade between India and Europe in the 18th Century. Today Madras, now known as Chennia, is a large commercial and industry center and is the automobile capital of India. Located on the Coromandel Coast of the Bay of Bengal, the 400 year old city is the 31st largest metropolitan area in the world. In addition to the retailer marking at the breech, the top of the barrel is also marked "50 EX" and there are various British proofmarks on the left side at the breech. The upper front left of the receiver is marked with a "crown/V" proof. The upper tang is marked "-MODEL 1886-" and the two patent dates are marked on the lower tang directly behind the trigger and the serial number on the end. The barrel is fitted with a dovetailed silver beaded blade front sight and a three leaf Winchester Express rear sight. Button magazine, blue barrel and desirable early casehardened receiver. The hammer, lever and buttplate are also casehardened. Mounted with a smooth walnut forearm with a steel forend cap and straight grip stock with a crescent buttplate.

Fine. The barrel has traces of blue with the balance a smooth mottled brown patina. The receiver retains 30% of the vivid original case colors with a smooth mottled gray patina on the balance. The forend cap retains most of the original age darkened casehardened pattern. The hammer and lever have a smooth dark patina, and the buttplate has a smooth mottled gray patina. The wood is also very good with some moderate wear on the toe area of the stock. There's a moderately small dent on the left wrist and overall some minor dents, dings and scratches. The markings are clear. The action is fine. A nice Winchester Model 1886 in the very desirable 50 express caliber and casehardened receiver made for an Indian retailer of the British Empire. 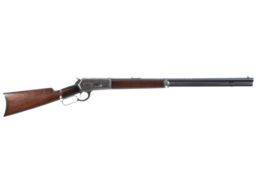 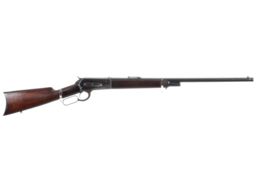 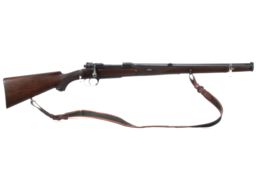 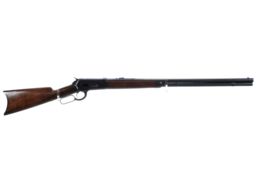 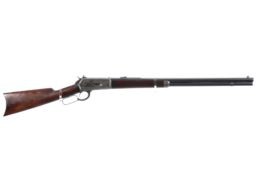 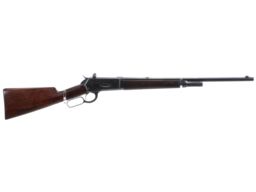