Developed on orders from the Luftwaffe, the FG-42 was designed to be a universal rifle for the Third Reich's elite paratroopers; a weapon that could render the full spectrum of Nazi-issued small arms obsolete by building one arm with the street-fighting maneuverability of a sub-machine gun, the area-suppression capability of a light machine gun, and the long-range precision striking power of a sniper rifle. The result is a gas-operated rifle chambering the standard 8mm Mauser cartridge, which could switch at will from a closed-bolt semi-automatic rifle to an open-bolt full-automatic machine gun at the turn of a switch. In many ways the FG-42 serves as a condensation of Nazi weapons development as a whole; an output of novel and impressive items, but with no co-operation between branches and little regard for the speed or cost of production. In order to get the weapon made, Goering had to pull an end-run around the Waffenamt (Weapons Office, dominated by the Army who didn’t care for the concept) and privately contract with German industry, and despite later efforts to simplify the arm the FG was still an intricate weapon requiring substantial man-hours of production time and detailed maintenance. While the rifle itself did not enter general issue, the lessons learned in building and fielding it would be applied to the MP-44, aka the Sturmgewehr, regarded as the first true assault rifle. Hooded post front and elevation adjustable peep rear sights, both of which fold down for transport, with a detachable cylindrical flash hider on the muzzle and "fzs/FG42" on top of the integral scope rail. Matching serial numbers and "fzs" stamps are present on multiple components, with the right handed reciprocating charging handle slotting into the ribbed handguard, the selector switch on the left side of the trigger group, and a later pattern Bakelite pistol grip. A sheet metal bipod is mounted to the barrel, doubling as a protective shield for the spike bayonet slot (bayonet not included) with a quick-detach laminated buttstock. Included with the rifle is a brown leather sling, one "sjl" magazine and eleven boxes of ammunition.

Very fine, with 90% plus of the original combined blue and phosphate finish, showing scattered handling marks and a few areas of brown patina. Some heavier rust is present on the bipod assembly, with some mild scuffs on the furniture. The buttstock has been painted. The sling is later production, and shows evidence of improvised/field repair. Mechanically excellent in closed and open bolt modes. One of the most mechanically intriguing weapons of World War II, virtually guaranteed to be a marquee piece in any collection of Nazi weapons or Class III items. NOTE: This item is registered with the BATFE as a machine gun. It is the sole duty of the bidder to understand and comply with all Federal regulations, as well as any laws or restrictions that apply specifically to their place of residence. 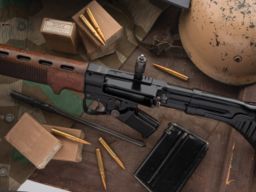 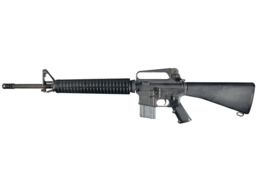 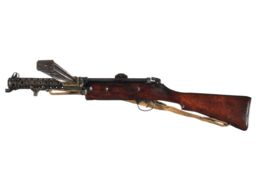 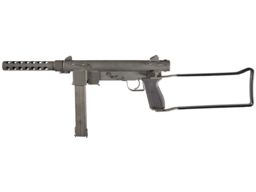 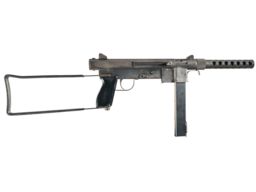 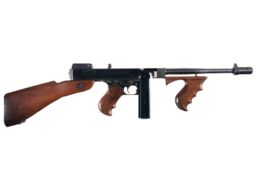