This gun is pictured and discussed in "Rifles of Colonial America Vol. I" by Shumway as gun no. 21. He notes that he believes this smoothbore and the others near it in RCA Vol. I are from the Reading, Pennsylvania, area c. 1750. The consignor notes that it and the others may be by Wolfgang Hachen (1721-1795), also known as Haga, the great-uncle of the famous Hawken brothers of St. Louis. He immigrated in 1750 and worked in the area and is believed to have been responsible for many of the region's unsigned rifles. In an included letter from Jim Knowles, he indicates the gun was purchased from a young boy back in the 1950s-1960s. The boy had purchased in an antique shop in the Cumberland Mountains. He also states that it was on display at the Smithsonian (images from the Smithsonian and a document from the Senator John Heine Pittsburgh Regional History Center are included), the NRA's Revolutionary War Bicentennial exhibit (image of the rifle in the "An American Rifleman" display included), and at the Kentucky Rifle Association. It was also pictured in "The Kentucky Rifle: A True American Heritage in Pictures" and displayed as part of the well-known "Clash of Empires: The British, French & Indian War, 1754-1763" exhibit (publication from the exhibit included, rifle not pictured). A copy of this rifle by David Dodds is pictured in the included copy of "The Broadside" newsletter of the Contemporary Longrifle Association on page 5. Other respected contemporary makers have also produced copies of this attractive and important early gun. As pointed out by Shumway, like other mid-18th century rifles, the forend cap is secured to the bottom of the barrel with a screw. The barrel is smoothbore but may have originally been rifled and subsequently rebored smooth when the rifling became worn or have been built originally as a "smooth rifle." It has rifle style sights. The Germanic lock has a non-bridled pan. The furniture is brass. The stock has molding along the forend, a pronounced swell at the ramrod entry pipe similar to Brown Bess muskets, tear drop flats, another tear drop at the barrel tang, incised lines along the bottom of the butt, scroll carving ahead of and behind the cheek rest, and faint letters "NO" visible under the cheek rest.

Very good with deep brown patina on the barrel, lighter gray and brown patina on the lock which Shumway noted was original and unaltered, aged patina on the brass, and mild overall wear. The partially restored stock is also very good and has some minor cracks and repairs mainly in the forend and lock mortise sections, areas of nice flame figure, distinct carving aside from at the "swell" where the carving has faded from handling, a professionally made replacement patch box lid, dents in the buttplate and wood near the toe, and general mild wear. Mechanically fine. Early American rifles and smooth rifles are very rare and desirable artifacts. A well-documented "smooth rifle" like this is sure to be a valuable addition to any collection 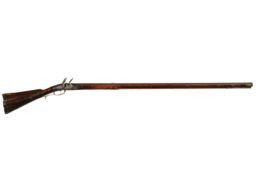 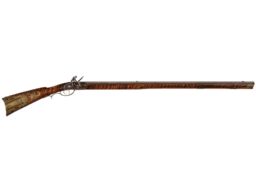 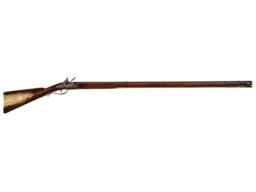 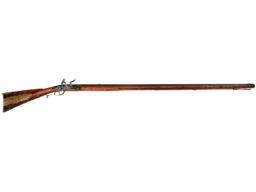 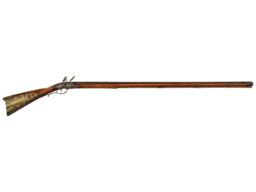