This pistol appears to be the long lost mate to the pistol by Peter Kunz pictured in "Kentucky Rifles & Pistols 1750-1850" by James Johnson on pg. 240 and also pictured in the article "Evolution of the Pennsylvania Rifle" by Crosby Milliman within the American Society of Arms Collectors' "Long Arms in America Volume 1" and identified as manufactured in North Whitehall Township, Lehigh County, Pennsylvania, c. 1810. Aside from a replaced trigger guard bow on this pistol, the two pistols are essentially identical. It has a smoothbore octagonal barrel with traditional blade and notch sights and "P. KUNZ" signed on a central brass inlay with tendrils that are engraved with floral designs and an engraved border just ahead. The lock is marked "R ASHMORE/WARRANTED," has a burst pattern by the pan, light floral engraving, and a stepped tail. The furniture is brass with nice engraving, including a star pattern on the pommel cap and a scroll pattern on the rear lock screw plate. The full-length stock has light molding, a panel of checkering at the ramrod entry pipe, a checkered bird's head grip, small silver wrist escutcheon, and five small star shaped bone or stag inlays flanking the barrel tang (sixth piece absent).

Very good with gray and brown patina along with some oil staining and mild pitting on the barrel and lock, aged patina on the brass and mild overall wear. The frizzen, top jaw, and screw are replacements. The stock is very good and has several mostly minor cracks, a well-executed spliced repair between the lock and barrel tang, partially smoothed checkering and molding, and mild dings and scratches. Early American pistols are very rare compared both to their European counterparts and to other early American firearms such as American long rifles. They certainly add depth and interest to any antique American arms collection, especially alongside American long rifles. 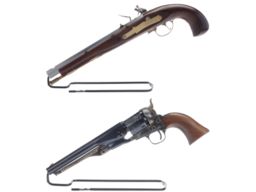 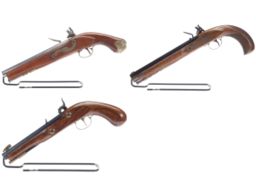 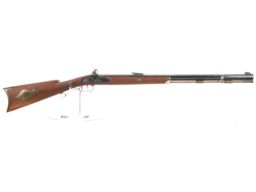 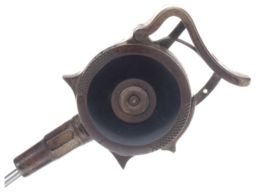 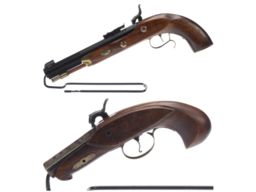 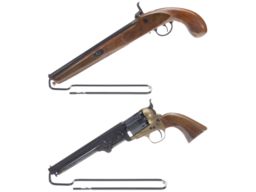