Offered here is one of the rarest models of Marlin Ballard rifles. In the words of Ballard expert John Dutcher, "The 4 1/4 Rifle is one of the most elusive Ballard models to find, and its in in fact decidedly rare." The model is so rare that Dutcher only devoted a single page to the No. 4 1/4 rifle in his definitive book on the subject, "Ballard: The Great American Single Shot Rifle." In the book Dutcher states he only knows of four No. 4 1/4 rifles, including this example. This exact rifle is the only example of a No. 4 1/4 Dutcher has pictured in his book (page 141). The rifle was originally chambered in .40-63 Everlasting but was re-chambered to .40-82 Winchester during its time of use. The top barrel flat has the desirable Utah retailer marking "BROWNING BROS. OGDEN U.T." The Browning Brothers retailer marking is also stamped on another known No. 4 1/4, no. 11188, which is less than 70 digits away from this rifle. As Dutcher pointed out, "Ballard did make special model runs of rifle for gun dealers," so having two rifles in close serial number proximity with the same retailer marking would not be unusual. The No. 4 1/4 is very similar in appearance to the Pacific model as both models are fitted with a hickory rod under the barrel. The No. 4 1/4, however, is equipped with a single trigger. The top of the barrel at the breech is marked "40-63" at the breech, and the left side of the receiver has the two line Marlin address/Ballard patent marking. Provenance: The Milan J. Turk Collection

Good, with a smooth artificial brown patina overall, some scattered patches of surface pitting, and some bruising mostly behind the hammer. The revarnished wood is also very good with a few long hairline stress cracks in the wrist and minor handling mark. Mechanically excellent. A unique opportunity to acquire a documented Browning Brothers marked Marlin Ballard No. 4 1/4 rifle with honest frontier use. 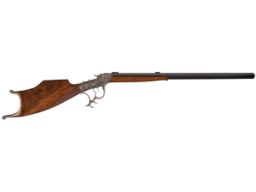 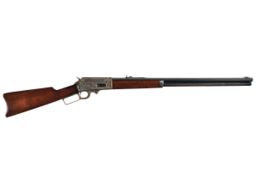 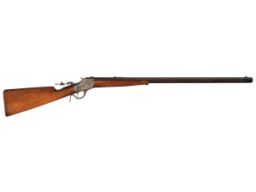 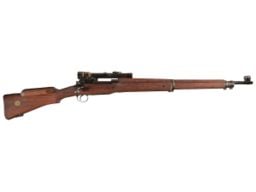 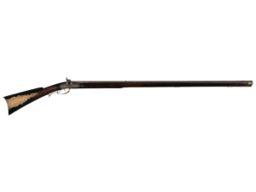 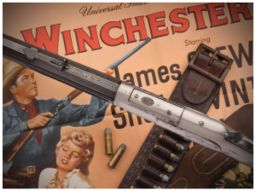