This pistol is marked "H-NOCK" on the left and "LONDON" on the right but has post-1813 Birmingham proofs and thus was manufactured after Henry Nock's death in 1804. His business was continued on by his foreman and son-in-law James Wilkinson. Henry Nock had famously manufactured the James Wilson designed "Nock Volley Guns," and after his death, his company manufactured manually rotated repeaters based on designed patented by Captain Artemus Wheeler of Concord, Massachusetts, in 1818. He was an associate of Elisha Collier who patented the designs in the U.K. at the same time and Cornelius Coolidge who patented the designs in France. The U.S. Navy tested the Wheeler pepperbox long guns making them the first revolving firearms tested by the U.S. military, but the Navy declined to adopt them. The Wheeler and Collier firearms set the stage for Samuel Colt's first revolvers. Some of the Nock pepperboxes use different mechanisms. On this example, the trigger guard is pulled to the rear to allow the barrel cluster to rotate. Each barrel has a corresponding cupped vent hole that would hold a small amount of priming powder. When the barrel is rotated into position, that powder and vent is in-line with the deep "pan" under the frizzen. This opening is shaped like a large funnel to guide sparks down to the priming powder. To ready the next shot, the shooter would pull back the cock, close the frizzen, and pull the trigger guard to rotate to the next barrel. There is a sliding half-cock safety that locks the frizzen closed. Other pistol examples are known with a lever on the side for locking the barrel cluster, and at least some of the carbine versions used sidelocks with self priming pans instead of individual priming charges. The current pistol's barrels have false rifling at the muzzles, and the outer barrels are numbered 1-6. The breech plate at the rear of the barrels is also numbered 1-6 and has Birmingham prof and vie marks. A niter blue collar with a band of floral engraving wraps around the breech end of the barrels. The boxlock action has some classical martial, border, and floral engraving. The flat sided grip has checkering along the back and a blank silver escutcheon. Provenance: The Collection of Joe M. Wanenmacher Jr

Exceptionally fine with 40% original niter blue, mostly bright polished action and barrels, mottled gray patina and some minor oxidation on the balance, crisp markings and engraving, and generally only light overall wear. The grip is very fine and has some minor edge and handling wear, distinct checkering, and light scratches and dings. Mechanically fine. This is a very attractive early revolving firearm. Guns like this example paved the way for Samuel Colt's famous revolvers. 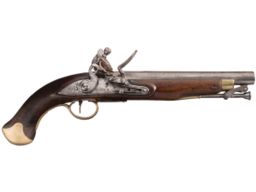 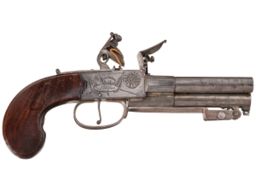 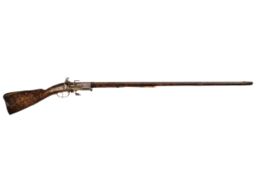 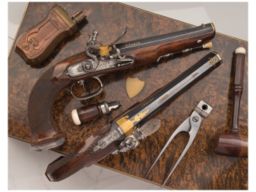 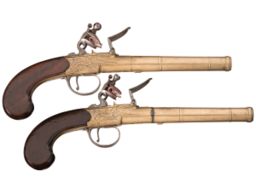 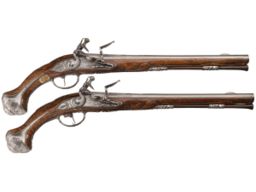