This revolver was manufactured in 1862 and subsequently was embellished in the 20th century. There is floral scroll engraving on the side of the barrel, nearly all of the frame, and part of the grip frame. There is an eagle head worked into the scroll work just above the wedge on the left and an animal head, scales, and scroll work on the hammer. The matching serial number along with a spurious "E" is marked on the bottom of the barrel lug, frame, trigger guard, and butt. The "E" was used by Colt to indicate factory engraved firearms from 1861 until the early 1870s. The wedge and cylinder also have the full serial number, and the cylinder pin has "869". It has the one line "U.S. AMERICA" barrel address, "COLT'S/PATENT" on the left side of the frame, "44 CAL" on the left rear of the trigger guard, and the patent marking on the cylinder. An outline of a cartouche appears to be visible on the left side of the grip. The presence of the eagle head near the wedge is consistent with revolvers engraved in the shop of Gustave Young. For comparison see the Col. R. M. Martin Model 1860 Army on page 82 of the "Book of Colt Engraving" which also has a very similar motif on the hammer and an animal head near the wedge. The manner in which the scroll engraving wraps around the barrel address also matches known Gustave Young engraved Colt revolvers. 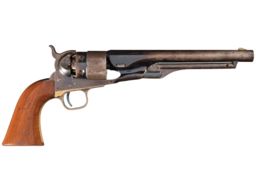 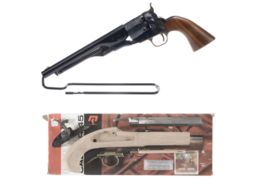 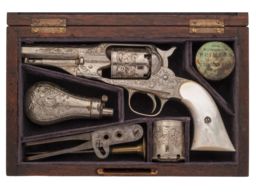 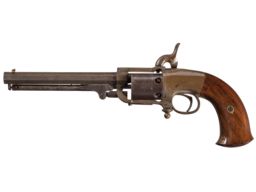 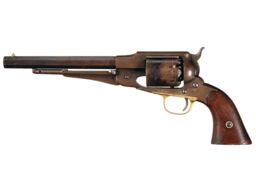 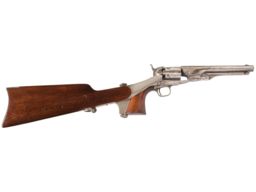