This is an excellent example of a very scarce all complete British L42A1 Sniper rifle rig. These rifles were developed during the mid-1960s and actually put into service in the early 1970s using the original WWII British Enfield No 4 MK 1 (T) sniper rifle as the basic weapon platform. These rifles were used until the mid 1990s when the British adopted the L96A1 rifle. This was the standard British Sniper rifle used in Northern Ireland, and the Falkland Islands. This rifle was intended as an updated sniper rifle, based on the original British Enfield rifle that was chambered for the standard 7.62 NATO round. It is estimated that approximately 800 rifles were converted/produced and approximately 400 were actually imported into the US in the late 1980s early 1990s by Navy Arms, with the rest being destroyed by the British Government. The original WWII rifles, scope and mounts were stripped down to the basic action, and scope tube and complete rebuilt as new rifles from the ground up. They installed new hammer forged barrels made of a special British steel of a heavier target weight configuration, converted the action to use the 7.62 NATO round by installing a new bolt head, (correctly marked and proofed for 19T), a new box magazine and ejector and then converted/rebuilt the old No. 32 MKIII scope to meters so that they were calibrated for the 7.62 NATO round. The old scope markings were just lined out and new ones applied. They also installed shortened top handguard and new improved forend, that allowed the barrels to free float. The left side of the buttstock still retains the original WWII markings of "M47C/1944/N30558/TR" and the left side of the receiver has the new markings of "L42A1D74/" over the old serial number of "N30558". The scope still has the original WWII markings of "TEL. STG. 32MK3/OS2039A" that were lined out and the new NATO markings of "OS2429 G.A./TELSTRT.STG.L1A" over the NATO stock number of "1240-99-962-2063". The original scope mount number was removed and the renumbered "N30558" matching to this rifle, directly in the center of the mount. This was standard practice with these rifles when they were rebuilt as they had to reuse the original mounts as no new ones were available. The scope is complete with an original set of British L42 leather scope covers, marked on the side of the strap "V5/1240" with an original WWII late production No.8 metal scope storage case. The top of the lid has been stenciled/painted; "TELE SIGHT NO 19650" (matching to the rifle) over "RIFLE N305 58" and a new set of instructions for adjusting the telescope have been glued inside the lid. The buttstock and handguard are made of walnut and the matching numbered forend is made of birch. The rifle itself is complete with the original issue cheekpiece, original British No. 4 sniper rear sight with the new L42A1 front sight, commercial leather sling and one 10 round 7.62 NATO magazine that was renumbered to the rifle. The rifle and scope have been painted black overall which was the correct finish used on these rifles. The rifle is complete with the original British issue green painted and numbered wooden storage chest. The chest has a hinged lid, three latches, two canvas carrying straps and metal corner protectors. The top of the lid had the original unit markings painted over with British Yellow paint (usually for security purposes) that has been remarked with the matching rifle and scope serial number. The wooden storage case also has a small original metal tag attached to the end of the case with the matching rifle serial number and NATO stock number marked on it. The inside of the lid has one affixed label that says; "CHEST RIFLE 7.62mm L-42 A1 / EQUIPMENT LIAI (CR 185 A)". Inside the chest there is a green metal case containing a plastic oiler, pull rope bore cleaner, bore brush and a tool and the super RARE "IWS" mounting bracket for the British starlight or infrared scopes. This bracket screws on directly to the side of the receiver and acts as a complete new mounting platform. These are never seen available anywhere, as they were all destroyed when the rifles were decommissioned. Also included are a manual dated 1971 titled; "Rifles, 7.62mm, L42A1 and L39A1 and TELESCOPES, STRAIGHT, SIGHTING L1A1 & SCOUT REGIMENT".

Excellent overall with 98% of the British arsenal black repainted finish on the rifle itself, scope and mount. The optics are clear and sharp and the windage and elevation knobs work correctly. The stock, forend and handguard are all in near excellent condition with matching numbers, but showing minor scratches and light dents and dings in a couple of places. The scope can retains 99% of its green painted finish with clear markings and stencils. The IWS bracket is like new and the green wooden storage case is also in excellent condition with 98% of the original green painted finish on the outside with only minor wear on the corners and edges and support blocks. The labels and support blocks inside are in excellent condition. A scarce example of a complete and all matching British L42 Sniper Rig. 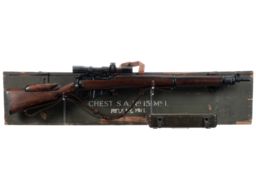 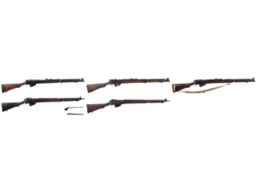 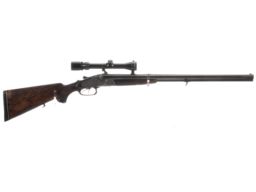 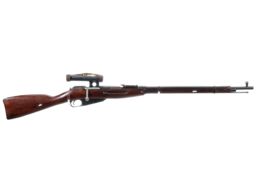 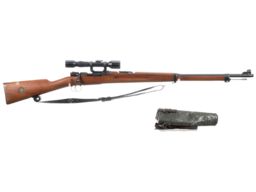 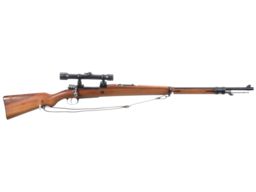