This is an original example of a super rare "No. 5 OSS" standard issue, escape knife as described on page 158 of book III, "U.S. Military Knives" by M.H. Cole. These knives obviously were issued to the OSS/SOE and probably French resistance fighters during WWII as a general purpose escape and evasion knife. You could probably consider these as a forerunner of the current Leatherman's tools in that they incorporated several types of knife, and small saw blades as well as being equipped with a small wire cutter all in one handy combination tool. The overall size of the knife is 5 1/2" long and could easily be carried in a small pouch or coat pocket. These knives were all blued and all unmarked, however as noted in the reference book, they were made by Joseph Rogers & Sons, Cutlers to His Majesty, of Sheffield England. They carried five different types of blades as follows; a small thick/heavy two-inch stabbing or piercing type blade with a small stub on the side that allows you to quickly open it with a flick of you thumb, a three-inch traditional style pocket knife blade with one side sharpened, and then 3, 3" type saw blades with a course serrated type cutting edge on each one. Similar to what you would typically see on a hack saw blade. Each one of these serrated blades on the back edge (or reverse side of the blade) has a small measuring scale inscribed in 1/4" increments. Then on the other side of the handle is a larger wire cutting/pliers with a single locking loop at the base of the handle, in addition to this there was a small screw driver tip on the hinge end of the blades/handles.

Fine with 75% of the original blue finish remaining with the balance showing an old dull browned out patina, mixed with numerous areas of light pitting and rust on the sides of the handles and blades. The piercing, serrated blade edges and wire cutter are all original and show little to no use, while the three inch cutting blade has been lightly sharpened on the edge. Even though not in pristine condition these are an extremely rare knife and are very rarely seen on today's market as most were destroyed after WWII. Making any surviving example extremely rare and valuable to both the WWII collector as well as the OSS/SOE Spy equipment collector. 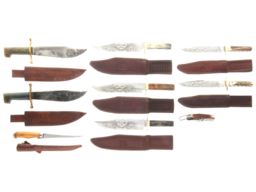 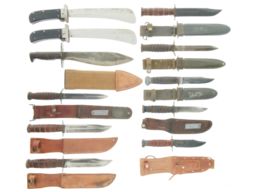 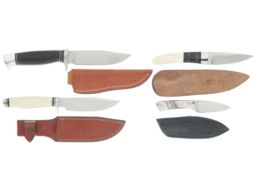 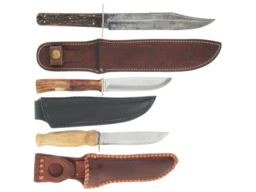 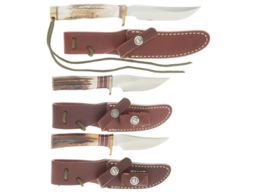 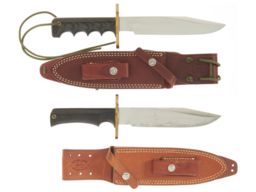