Excellent overall with 90% plus, original Colt high polish blue finish. The areas that show minor blue wear and or oxidation are along the edges and high spots overall, such as the front edges of the slide and the transition lines on both sides of the lower frame extension, that has mixed with a few minor spots of pin-prick oxidation. The left side of the slide also shows some very, very minor areas of pin-prick pitting or oxidation directly over the slide makings. The area that shows the most wear is confined to the rear grip strap as well as the lower rear edges or flats of the frame directly behind the grips themselves. Both of these areas show thinning and browning of the blue finish, mixed with some minor bright spots where the attaching iron of the Ideal stock has come in contact with the rear grip strap and the middle and upper section of the front grip strap. This is exactly where you would expect to see any wear as it would be where a person would be holding the pistol during a normal firing position with the stock attached. The gold inlaid 'T.R.' initials are clear and distinct with all the Gold fill still remaining in place, just showing some very minor scratches over one of the initials, as if someone was test the Gold material for softness. The black checkered Colt grips are in excellent condition with nice sharp checkering with clear markings showing just some minor wear across the face of the rampant Colt horse. The checkering itself is still distinct and visible with only a couple of very minor chips along the back edges of the grips where the Ideal stock is inserted. The rare Ideal combination holster/stock is in very good condition overall with 95% of the blue finish on the metal sections with some minor oxidation on the front attaching iron itself and where you would expect someone's hand to be in contact with the metal. The leather holster itself is showing 85% of the original black finish, with wear along the top and bottom edge, showing flaking along the top edges where it would contact the firer. Over all this is exceptionally nice condition for what it is and would certainly be a significant find for any major advanced collection or potential investor, with something of this nature, an early very desirable Colt automatic pistol, direct 'Presidential' association, impeccable Colt historical documents, excellent overall condition, what more could you ever expect or find!

This has got to be the 'Pièce De Resistance' for any advanced Colt pistol, martial arms collector or collector of Presidential memorabilia in the world. This is your chance to own, the most historic Colt semi-automatic pistol that has been documented as having being expressly given as a personal gift by Frank Julian Price esquire, President of Colt Firearms, directly to one of the most colorful, patriotic and certainly heroic President's of the 20th Century, President Theodore (Teddy) Roosevelt. This actual weapon is a Colt Model 1902 Military Semi-Automatic Pistol with an original 'Ideal Patent' combination leather holster/wire stock. The left side to the slide has two prominent Gold Inlayed initials; 'T.R.' inset just below the ejection port. Certainly Teddy Roosevelt needs no introduction if you are any kind of an American, or history buff whether that be a Democratic or Republican. The practice of Colt presenting special firearms to diplomats, and other high-ranking Governmental or influential people, was originated by Samuel Colt in the early 1850s. It was a well-proven practice which yielded large orders of Colt handguns. Obviously, presentation of this relatively new Colt Automatic pistol (which is in the first 100 made of this model as they began at serial no. 14999 and were numbered in reverse order i.e. 14999 is the first, 14998 is the second, and so on. 14941 definitely is early) to a current President of the United States could be beneficial. The impeccable documentation that accompanies this RARE and Historic pistol are 1) Factory ledgers document gold-inlaid initials “TR” and shipment billed to the Colt Presentation account, c/o Frank Julian Price on March 1, 1903. (see factory letter illust.) 2) The next set of documentation, which impeccably documents this Colt Automatic pistol as being President Theodore Roosevelt’s, is in the U.S. Library of Congress. Contained in The President’s Papers Index to the Theodore Roosevelt Papers, are two very significant letters; the first one dated March 4, 1903 (3 days after factory shipment, March 1, 1903 to Frank Julian Price) is a thank you letter to F.J. Price for the Colt Automatic from President Theodore Roosevelt. (see illust.) Also in this thank you letter is a question about whether it fires smokeless cartridges. Obviously Roosevelt had interest in firing his present and had no previous knowledge of this revolutionary automatic pistol. The second letter dated March 5, 1903 (the very next day after Theodore Roosevelt’s letter and 4 days after factory shipment) is from Frank Julian Price to President Roosevelt. (see illust.) In this letter he states; “I am very glad you like the Colt Automatic. As to the cartridges, the weapon takes either the 38 calibre Automatic Colt or the .38 calibre Rimless Smokeless…” This exchange of letters clearly identifies and documents that both men are discussing a presentation handgun that was definitely a 38 Colt Automatic Pistol. This is significant in that on March 5, 1903 the Colt Model 1902 Military Automatic Pistol was the most current Colt Automatic and that the U.S. Army was in the process of testing this specific model. This was the cutting edge of technology in 1903 consequently any interest or involvement by the President could have had great implications for future Colt Army contracts. Obviously, a positive endorsement from the President of the United States would certainly improve Colt’s efforts to secure a future Government contract for this new handgun. Some general information on the model 1902 semi-automatic pistol is that Colt manufactured approximately 18,000 of the Military Model 1902 between 1902 and 1929. The pistol has the checkered cross hatched (finger nail file) serrations on the front of the slide, rounded rear sight, rounded casehardened hammer, squared grip, 8 round magazine and casehardened lanyard loop on the lower left side of the frame. The pistol is fitted with black checkered hard rubber grips with "COLT" in a banner at the top and circled Rampant Colt in the center, which have been adopted for use with the Ideal combination leather holster/wire stock. The pistol has the high polish commercial blue finish, niter blue screws, rear sight, slide pin and trigger, blue barrel and unmarked blue magazine. The right side of the slide is marked: "AUTOMATIC COLT / CALIBRE 38 RIMLESS SMOKELESS" behind the ejection port and "MODEL 1902" in front of the port. The opposite side of the slide is marked ""BROWNING'S PATENT" / PAT'D APR. 20. 1897 / SEPTEMBER. 9. 1902." in a two line block followed by "COLT'S PATENT FIRE ARMS MFG. CO. / HARTFORD. CONN. U.S.A.". The Rampant Colt motif is stamped on the left rear. 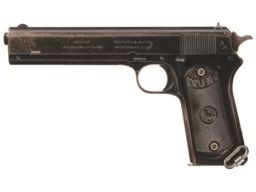 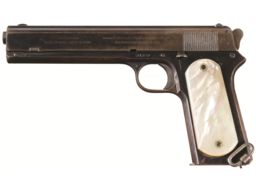 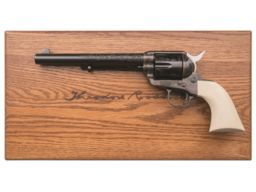 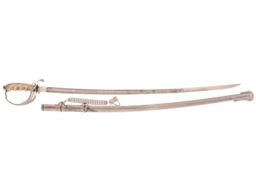 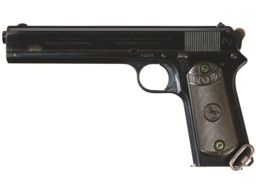 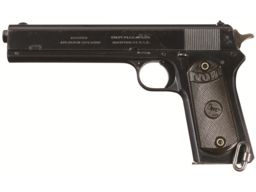