This is an extraordinary example of a U.S. Colt B Company Walker Model Revolver that was manufactured in 1847 at facilities owned by Eli Whitney, Jr. The Walker Model Colt design was developed by Samuel Colt in 1846 and influenced in part by suggestions from the former Texas Ranger Samuel Hamilton Walker who was serving as a Captain in the Regiment of Mounted Riflemen. On December 7, 1846 Colt met with President James K. Polk to promote his revolver. President Polk directed Secretary of War William L. Marcy to order 1000 revolvers from Colt thru the Ordnance Department. This order marked the beginning of the relationship between Colt and the U.S. military which exists to this day. Colt made arrangements for the revolvers to be manufactured by Eli Whitney at the Whitneyville Armory. The original intent was to issue two revolvers per man to the Mounted Rifle Regiment; the revolvers were marked "A Company-E Company" and numbered 1-110. Whitney manufactured 220 pairs of revolvers marked "A Company-D Company" and 120 revolvers marked "E Company" for a total of 1000 revolvers. The first Walker Model Revolvers arrived at the Ordnance Depot in Vera Cruz, Mexico, in October of 1847. The First Regiment, Texas Mounted Volunteers commanded by Colonel John Hays was issued 394 Walker Model Revolvers marked A, B and C Company on October 19-26, 1847. The Texas Mounted Volunteers used the Walker Model Revolvers hard in numerous encounters with Mexican guerilla forces. Only 82 serviceable were turned in when the Texas Mounted Rifles were mustered out of Federal service in 1848. Captain Samuel Walker was killed in action at Huamantla, Mexico, before the Regiment of Mounted Rifles received the revolvers he helped to design. At the conclusion of the Mexican War, most of the remaining Walker Model Revolvers were issued to the 2nd Dragoon Regiment on the Texas frontier. The massive, hard-hitting Walker Model Revolvers were highly desirable weapons that saw hard service in the Southwest in the years that followed the Mexican War. This impressive revolver has a 9 inch half-octagon barrel, 2 7/16 inch six-shot cylinder and weighs 4 pounds, 9 ounces. The barrel and iron back strap were originally blue, the loading lever, frame and hammer casehardened and the cylinder was bright. The revolver has a brass square-back wide bottom trigger guard and one-piece black walnut "Slim Jim" grip. The loading lever has a rounded end and is secured by a T-shaped barrel mounted spring which slot thru a channel in the lever lug. The cylinder has a single locking pin that engages a hole in the base of the hammer. The barrel has a German silver front sight blade. The top flat of the barrel lug is roll-stamped "ADDRESS SAML COLT, NEW-YORK CITY" in bold letters reading from the breech to the muzzle. "US/1847" is roll-stamped on the right side of the barrel lug with the date partially covered by the wedge screw. "B COMPANY No 8" is roll-stamped on the left side of the barrel lug above the wedge slot in large letters. The left side of the frame and the bottom of the back strap has the identical "B COMPANY No 8" marking. The bottom of the trigger guard is marked "B COMyNo 8" in small letters stamped perpendicular to the axis of the bore. The cylinder is roll-engraved with the Ranger and Indian battle scene, "MODEL U.S.M.R./COLT'S PATENT" and "W.L. Ormsby Sc N.Y." "B COM-Y No 8" is stamped on the side and "8" on the bottom of the cylinder arbor pin. The rear face of the cylinder is numbered "448". This would make this the 448th revolver made as Colt reportedly made the 220 C Companies first, the 220 A Companies second, thus expending 440 numbers. Next would be the B Companies, with this example being the 8th one produced, thus number 448. All of the visible numbers match. A "B" Ordnance sub-inspection mark is stamped on the front edge of the cylinder and on the back strap. The wedge is not marked. The Ordnance final inspection stamp which consists of the script initials "WAT" with an oval border is visible on the lower right grip heel. The Ordnance sub-inspectors stamp consisting of three script initial (JCB?) in an oval is stamped on the lower grip heel (only the final letter "B" is legible).

Very fine. The revolver is all original and is in outstanding condition for a U.S. contract Walker Model 1847 Revolver. The surfaces of the barrel and lug have strong traces of original blue and are mostly crisp with edge wear and some very minor flash pitting at the muzzle and on the sides of the lug adjacent to the cylinder. The Colt address, company marking, date and U.S. 1847 marks are crisp and clear. The frame has an attractive silver-gray patina. The sides of the frame are smooth. There is light flash pitting on the left recoil shield and heaver pitting in the hammer well. The company markings on the left side of the frame are clear. The cylinder retains nearly all of the original Ranger and Indian scene with crisp company and sub-inspection marks. The cylinder nipples and face have moderate flash pitting and the safety pin is battered. The hammer has a dark patina and shows moderate flash pitting on the sides. The brass trigger guard has an attractive "mustard yellow" age patina with crisp company markings. The bottom of the back strap has a number of shallow sings with the company marking remaining very fine. The sub-inspection mark of the middle of the back strap is crisp. The loading lever has been repaired and lengthened many years ago and has naturally aged with a brown patina overall. The grip is in very fine condition with moderate handling wear. There are a number of dings and scratches on the butt and the lower edges of the grip are correctly round. Both the ordnance final inspector's and sub-inspector's stamps on the grip heels are visible. This is an exceptional example of the most important and desirable of all Colt firearms. Few original Colt Walker Model Revolvers are known to collectors; many of these are in relic condition with illegible or restored markings and significant replacement parts. This is a very fine example of a U.S. contract Colt Walker Model that would be the centerpiece of the most advance firearms collection. Writer truly believes this example to be the finest Walker Revolver that our auction company has ever offered. 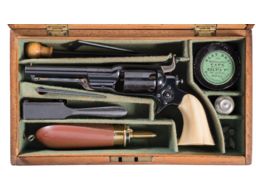 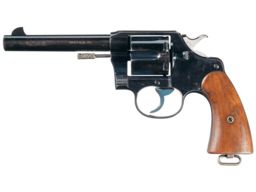 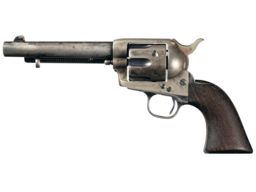 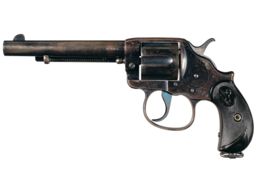 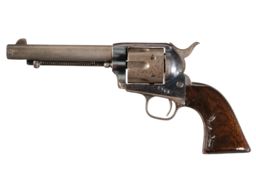 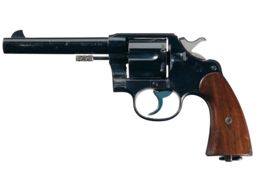