Model 1891 Mosin-Nagant rifle manufactured in 1915 by the New England Westinghouse Company for the Imperial Russian government. After the Bolshevik Revolution in 1917 the Russian contracts were terminated and approximately 280,000 Model 1891 Moslin Nagant rifles manufactured by Westinghouse and Remington were purchased by the Ordnance Department. When the U.S. 395th Infantry Regiment deployed to North Russia in 1918 it was issued U.S. Model 1891 Nagant rifles manufactured by Remington and Westinghouse to enable the troops to utilize stores of 7.62 Russian ammunition and make Model 1917 and Model 1903 rifles available to the American Expeditionary Force in France. The 395th Infantry saw considerable action against Bolshevik troops in North Russia before the American and British forces were withdrawn in August 1919. Some U.S. Model 1891 Nagant rifles were issued to U.S. forces sent to Siberia in 1919. The rifle has a high quality military blue finish on the barrel, receiver, magazine and buttplate. The bolt and trigger are bright. The stock and handguard are oil-finished black walnut. The top of the barrel chamber is roll-stamped: "NEW ENGLAND/WESTINGHOUSE/ COMPANY/1915/No./1300399" along with numerous Imperial Russian proof and inspection marks and five Eagle's head/X5, X4, X2, Y29 and Y22 Ordnance Inspection stamps. An Ordnance 'Shell and Flame' insignia is stamped on the top of the bolt near the handle. Large "Eagle's head/Y4" and "Eagle's head Y22" Ordnance Inspection marks are stamped on the underside of the stock on either end of the trigger guards. A round Imperial Russian inspection mark is stamped on the left side of the stock.

Near mint/unissued. The rifle is in nearly new condition and shows only scattered and very minor storage marks. The barrel, receiver, magazine and trigger guard have nearly all of the original military blue finish intact. The only finish wear is on the heel of the buttplate. The bolt, trigger and sling escutcheons retain all of the original bright finish. The New England Westinghouse, Russian inspection marks and U.S. ordnance inspection marks on the receiver, bolt and stock are extremely crisp. The stock is in near mint condition with all of the unhandled raised grain and original oil finish. The edges of the stock grasping grooves are sharp. Wear is limited to several very minor and old storage marks on the stock. The Russian inspection stamp on the left side of the stock and the U.S. Ordnance acceptance stamps on the underside of the stock are in perfect condition. This is an outstanding, un-issued, example of one of the very few foreign rifles issued to U.S. troops in WWI that was actually used in combat by the U.S. Army. You will not find a better example. 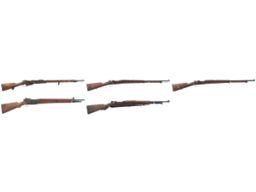 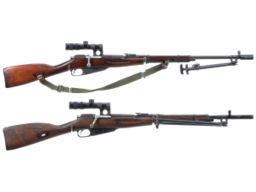 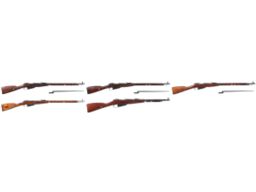 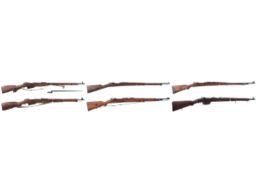 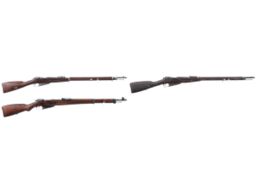 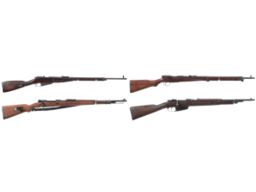