Near new in box, with 99% of the original blue finish, showing some light handling marks overall. Grips are excellent, with sharp checkering. Box is very good, with mild wear and scuffing. Mechanically excellent.

According to information provided by the consignor, this revolver was part of a special project initiated by Colt in the mid to late 1960s to produce a weapon for the recently formed Air Marshal Service. Using a snub-nosed Lawman revolver as the base, the standard, fixed cylinder has been replaced with a removable plastic cylinder, in which is permanently installed a set of 6 metal chambers. Individual cylinders would effectively serve as interchangeable, disposable speed loaders. In addition, these chambers were meant to be loaded with a combination of a reduced power charge and a plastic slug, which was believed capable of doing sufficient harm to an attacker without jeopardizing the plane itself. Blade and notch sights, with the two line model and caliber markings on the barrel, the Rampant Colt ahead of "V" on the left side of the frame, and checkered grips with Rampant Colt medallions. The plastic cylinder is unfluted, with "32/7" hand marked on the side. With a Colt wood grain box numbered to gun. 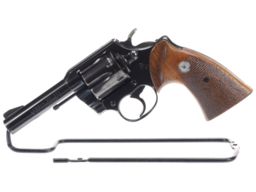 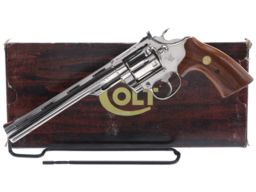 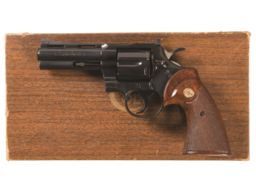 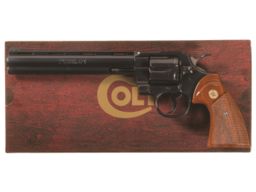 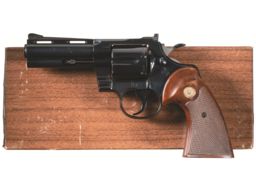 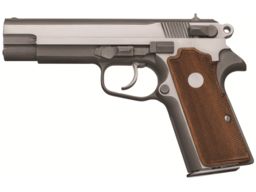