Rare example of the 1000 knives purchased by the Ordnance Department from the Ames Manufacturing Co. in 1849 for issue to U.S. Regiment of Mounted Rifleman. The Model 1849 Rifleman's Knife has the distinction of being the first knife officially designed and purchased by the U.S. Army. The massive knife is 18-inches long with an 11 7/8-inch spear point blade, cast brass cross guard and slab-sided walnut grips. The walnut grips have a distinctive brass lined thong hole in the pommel and are secured to the tang by three rosette-headed steel rivets. The blade is fitted with a buff leather washer. The knife is complete with the original black leather scabbard with brass throat and tip. The throat has an oval frog stud. The obverse ricasso of the blade is stamped with a "US" property mark and the reverse is roll-stamped "AMES MFG. CO./CABOTVILLE/1849" in three lines. This knife is a rare prototype or pre-production sample; the knife and scabbard are identical to issued examples of production U.S. Model 1849 Mounted Rifleman's Knives but lack the Ordnance Department sub-inspection and final inspection marks on the obverse of the blade, cross guard and on the scabbard frog stud. The Model 1849 Rifleman's Knife was procured as a special weapon for the U.S. Regiment of Mounted Riflemen who were armed with Colt Dragoon revolvers and U.S. Model 1841 rifles but did not carry sabers. The U.S. Mounted Rifles were ordered to Oregon Territory in 1849 and were subsequently assigned to garrisons in California. Large numbers of Mounted Riflemen deserted during the gold rush and many of the Rifleman's Knives probably left U.S. service with the deserters. The Ames Model 1849 U.S. Mounted Rifleman's Knife is the rarest and most desirable of all U.S. military knifes and is typically found only in advanced U.S. martial arms collections.

Very fine. The blade retains most of the original bright finish with scattered age discoloration. There is some very light pitting on the tip of the blade. The edges are free from nicks and the blade does not appear to have been sharpened. The "US" property mark and the Ames address on the ricasso are crisp. The buff leather washer, rarely found on these knives, remains in very good condition. The brass counter guard is free from nicks and scratches and has an attractive patina. The walnut grips are in very good condition with moderate handling wear. The black leather scabbard body has the expected age cracks but the stitching on the reverse side is tight. The brass throat and tip have minor handling dents and two brass rivets are missing from the reverse side of the tip. This exceptional original Ames Model 1849 U.S. Mounted Rifleman's Knife is one of best examples of these very rare knives extant and would be the centerpiece in any collection of U.S. military knives or edged weapons. 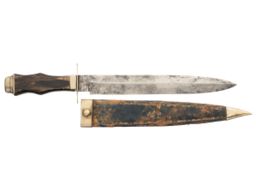 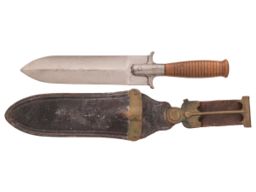 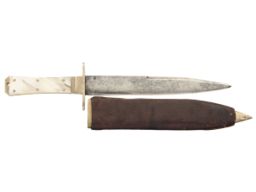 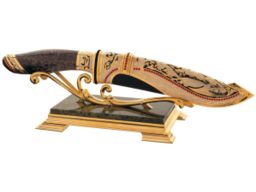 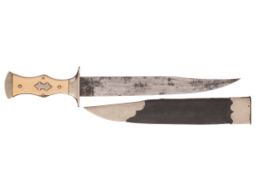 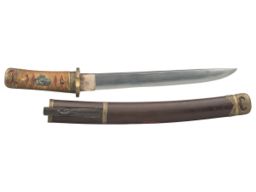