Rock Island Auction Company is proud, pleased, and honored to present the collecting community with the most famous, the most renowned, and among the most sought-after of all variations of the Colt Single Action Army. This is an extremely rare, totally original example of a Colt Single Action Army Revolver with 16-inch barrel, special front and rear sights and attachable factory stock; popularly known as the "Buntline Special". This revolver is complete with two Colt factory letters dated 1969 and 1970. The factory letters describe the revolver as .45 caliber with 16-inch barrel and blue finish. The letters further state that this is one of five revolvers shipped to B. Kittredge & Co., in Cincinnati, Ohio, on March 30, 1880. One of the letters is addressed to the well known antique firearms dealer Herb Glass of Bullville, New York. The revolver is also accompanied by extensive documentation including a 1956 dated letter to Herb Glass from John S. Du Mont. In that letter Du Mont states that he examined this revolver and the Colt factory records and believes it to be "genuine in every respect". A type-written note attached to the Du Monte letter signed by "Rev. Henry Lee Jones" (who apparently sold Colt No. 28826 to Herb Glass) states that No. 28,826 was purchased by H.J. Payne in "the late 1890s" in front of a saloon "on Front St., in Catlettsburg, Kentucky", from "a Logger who had come down the Big Sandy river". Experts believe that the accepted serial number range for carbine-length-barreled Single Action revolvers is 28,800-28,830 (A STUDY OF THE COLT SINGLE ACTION REVOLVER, Graham, Kopek and Moore, page 25). Also present with the revolver is a 28 page R.L. Wilson letter in which he writes "Serial No. 28826 is an excellent example of one of the most difficult and rare of all Legends of the American West firearms to acquire." In the letter Mr. Wilson also states this revolver serial number 28,826 to be "one of the finest known". Included with this revolver is "The AMERICAN RIFLEMAN" January 1976 issue, which pictures this particular Buntline along side lot 228 (also in this sale) on the front cover; both Colt revolvers are formerly of the Thomas Burnham Collection. Eighteen revolvers in this serial number range are recorded in Colt's factory records and 10 of these revolvers have 16-inch barrels. This particular revolver is probably the best documented of the "Buntline Specials". The revolver has a blue barrel, ejector housing, cylinder, trigger guard and back strap. The frame, hammer and loading gate are color casehardened. The one-piece walnut grip has a high polish varnish finish. The attachable stock is bronze with a nickel-plated finish and blued attachment knob. In addition to the 16-inch barrel, the revolver has a special extended hammer screw that serves as a lug for the shoulder stock, a flat top strap with milled groove that is fitted with a unique, folding, long range rear sight and dovetail mounted front sight with nickel silver blade. The ejector rod has the early "bullseye" head. The hammer has extended, bordered, knurling on the spur and a cone-shaped firing pin. The top of the barrel is roll-stamped with the "Condensed Block" address "COLT'S PT.F.A.MFG. Co. HARTFORD, CT.U.S.A.". The left side of the frame is roll-stamped with the Colt "two-date/two-line" patent markings. "45 CAL" is stamped on the left shoulder of the trigger guard. An "H" inspection mark is stamped in the hammer well above the firing pin hole and "20" is stamped in both the rear sight recess and on the face of the ladder rear sight. The full serial number, "28826" is stamped on the bottom of the frame, trigger guard and back strap. The partial serial number, "8826" is stamped on the underside of the barrel beneath the ejector housing. All of the visible serial numbers match. The assembly number "29" is stamped on the inside of the loading gate.

Fine overall. As noted in the letter from John S. DuMont to Herb Glass; the revolver is all original. The barrel has a smooth gray-brown patina; the original commercial blue finish is visible beneath the ejector housing and around the rear sight dovetail. The barrel legend and serial number are crisp. There are traces of very fine flash pitting on the edges of the muzzle. The trigger guard and back strap have the same patina as the barrel with small amounts of blue finish in protected areas. The cylinder has a darker patina with some fine flash pitting on the face and sides. The frame, loading gate and hammer have a smooth silver-gray patina and retain significant amounts of case colors in protected areas particularly in the rear sight groove. The rear sight is complete with the sighting bar. The serial numbers, patent markings and caliber designation on the frame, trigger guard and back strap are crisp. The walnut grip is very fine and retains nearly 90% of the piano-finish varnish; wear is limited to finish loss on the grip heels and some minor handing marks on the sides and butt. The attachable stock is excellent and retains nearly all of the nickel-plated finish and most of the blue on the attachment knob. The action is crisp and functions perfectly. The Colt "Buntline Special" Single Action revolver is the most desirable and difficult to obtain of all the Colt Single Action variations. This outstanding revolver is well documented as having been owned and examined by some of the foremost Colt Single Action Army experts and collectors. This is the ultimate Colt Single Action Army revolver and quite possibly 19th Century American revolver! 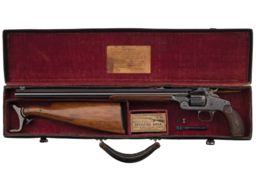 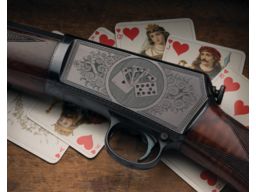 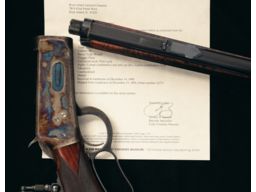 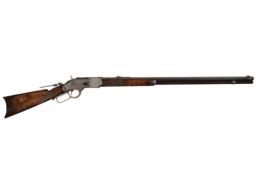 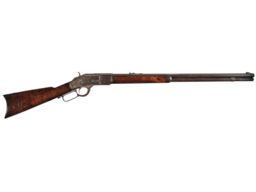 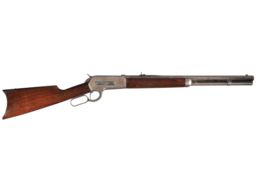